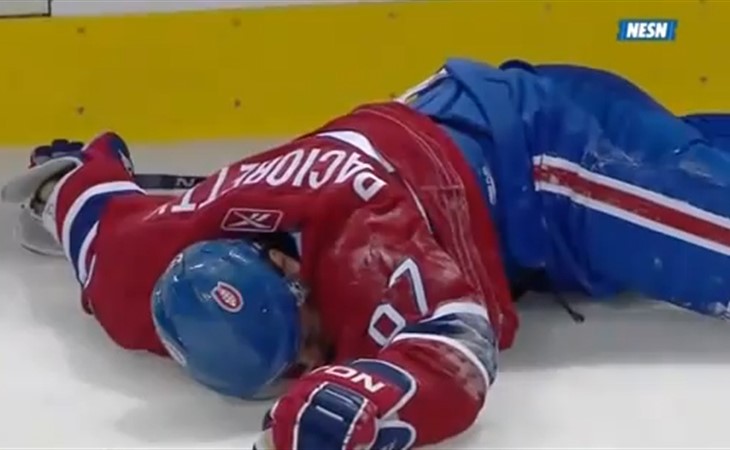 Pin the Tail on the Donkey


This is a gossip blog and we typically stay away from marrying sports and gossip here unless Carrie Fisher, Jessica Simpson, or Cameron Diaz is involved. But we’re also a Canadian blog, and hockey is Canadian religion, and many of you have asked about our take on the recent hit by Boston Bruin Zdeno Chara on Max Pacioretty of the Montreal Canadiens. The video is here if you missed it.

Pacioretty suffered a fractured vertebra and a severe concussion on play. He was taken to hospital and is now recovering, and obviously there is no timeline on his return. Meanwhile, the NHL elected not to suspend Chara for the hit citing that it was “a play that evolved and then happened very quickly — with both players skating in the same direction and with Chara attempting to angle his opponent into the boards” (source), and because they felt that Chara did not intend to injure Pacioretty. Bruins fans agree with the ruling. Montreal fans are enraged to the point where protest rallies are being organized, and Quebec police are launching an investigation.

My take on it is this: The NHL had an opportunity to make things right and f-cked it up royally. Chara interfered with Pacioretty as the puck had been chipped by. Chara should have let him go to avoid an interference minor, which surely would have been called had the play continued “normally”. So there was an infraction on the play, and in this case it resulted in serve injury. Had he been hit into the stanchion while possessing the puck, perhaps it could have been dismissed as an unfortunate outcome of a legitimate hockey play.

So the NHL had an easy opportunity here to say the injury was caused during an “illegal” play and hand Chara 2-3 games. Montreal hockey fans would have probably thought it was too short, but being knowledgeable hockey fans they might have been able to swallow the fact that the design of the rink played a part and that sh-t happens. Boston fans would have grumbled about it as being a PR-driven suspension but accepted it as a consequence of what was a nasty scene between two players with a history between each other.

But no, the NHL’s bosses are an odd and unpredictable bunch. The NHL’s disciplinary arm is run by ex-players with linear minds and an unwillingness to set precedent fearing the game’s integrity as a hard-nosed sport will somehow be compromised. What they’re missing, however, is that their rulings aren’t going to change the game. Whether they hand out 20 games or nothing at all, players will always make dangerous hits because in the heat of the moment in a quick moving, physical sport, rational thought is suspended. It is suspended in the milliseconds it takes for a free safety (in football) to crush a vulnerable receiver helmet first, or (in hockey) a defenceman to stick out an elbow because his perfectly lined up hit suddenly looks to miss when his target moves to avoid it. It happened 20 years ago, it happens now, and it will happen tomorrow. Only at higher speeds.

What disciplinarians can control is the perception that dumb or irresponsible plays will have consequences to the offending player. And the satisfaction of paying fans and sponsors that while these things do happen, prices will be paid and recklessness won’t be tolerated.

Late yesterday Air Canada announced that they’ll consider pulling sponsorship dollars from hockey if more is not done to clean up the game. Perhaps if precious ad dollars are at stake, the NHL will evaluate its disciplinary process which, by most layman accounts, has been as random and unpredictable as rolling dice or playing ‘pin the tail on the donkey’. And it’s no surprise that Commissioner Bettman felt compelled to chime in only after this announcement came out. At least he has his priorities straight.

PS…As a Canucks fan with no bias here, in my opinion Chara knew where they were on the ice and what he was “accidentally” doing. That push with the forearm at the end of the hit is a bit suspicious in my mind if he claims it was unintentional.