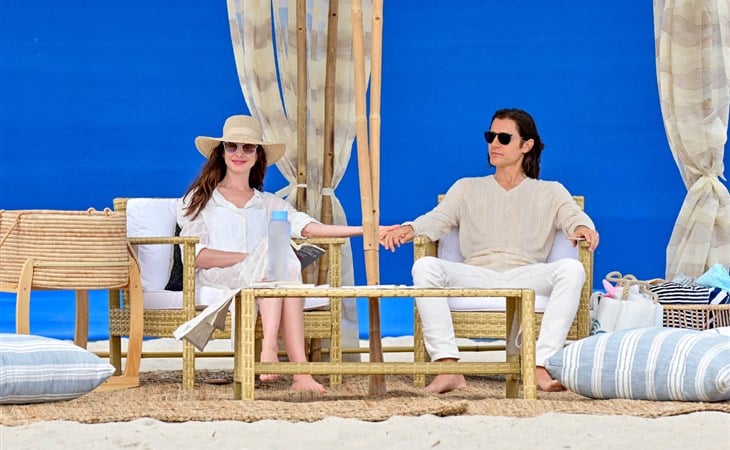 No matter what your kink – be it podcasts or documentary series or television series or books or magazine articles, by now at least some of you are aware of the WeWork story. The WeWork story is currently what Theranos and Elizabeth Holmes were in the culture a few years ago, with all kinds of content already released and more in production dedicated to how WeWork exploded and then imploded, and at the heart of it the Neumanns, Adam and Rebekah. They are being played by Jared Leto and Anne Hathaway for an Apple series called WeCrashed that’s filming now.

Here are some shots of Jared and Anne shooting on the beach in New York earlier this week. This is the photo I found particularly hilarious:

Because that pretty much illustrates how the Neumanns have been characterised since WeWork’s downfall. They’re literally dressed like cult leaders in their loose linens, and holding hands while he’s on the phone; if you know anything about WeWork and what happened, and the New Age philosophy behind which they peddled their bullsh-t, this is precisely the kind of wellness fraud image they perpetuated.

While Adam Neumann was initially the person most immediately associated with the WeWork brand, Rebekah has emerged as a huge influence on the business and one of the major reasons why it failed. For me, in every profile I’ve read about the situation, it’s the details about her that make me scream. It was Rebekah who launched the “educational” branch of We, because she was unhappy with the academic options she had exhausted for her children. With no background in education, she started WeGrow, a private school in New York she had hoped to develop into a universal education system that charged up to $42,000 in tuition depending on the students’ age. The value? If you were able to pay that much for your child to go to WeGrow instead of the other expensive and more established private academic institutions? Rebekah’s concept promised to truly unleash potential. As she told Bloomberg, “In my book, there’s no reason why children in elementary schools can’t be launching their own businesses”. Sure. You can’t get a social insurance number in elementary school but, by all means, launch a business, LOL forever.

If you haven’t already, read every profile on Rebekah you can find, because all of them are a scream. If you need a recommendation, here’s one in Bustle from March 2020. You’ll note, in all the profiles of Rebekah, the word “energy” comes up a lot. The way people describe her, she conducted much of her business by “energy”, firing or hiring employees on the basis of “good energy” or “bad energy”. One person told Vanity Fair that “I got the sense that she was guiding the company through her astrological intuition”.

And then there’s WeWork’s now infamous S-1 form which New York University marketing professor and author Scott Galloway said in the Hulu documentary “read like a novel written by someone who was ’shrooming.”

It’s hilarious. But also disturbing. Because as f-cked up as this sounds, there are people who invested a LOT of money, billions of dollars, into this “energy”. And the collapse of their empire was fast, dramatic, and well, probably predictable, considering that business analysts are now comparing the Neumann’s business approach to a tarot card reader.

Still, that’s the power of enigmatic figures, that’s why WeWork has been compared to a cult…although, strangely enough, many of those who knew or know Rebekah don’t consider her to be all that charismatic. If you’ve watched the Hulu documentary, she doesn’t exactly sparkle. So to go back to Anne Hathaway, I’m so curious about how she’ll be playing her. Because Annie can certainly sparkle. Annie has screen presence. This, however, is Anne Hathaway as a grifter, stepping into the role of someone who leads her life by “energy” and one of the goals of her performance will be to ground the character, even though a lot of what’s assumed and presumed about the Neumanns sounds like an SNL sketch.

I do like some of the wardrobe choices so far though, especially this black outfit and those mary-janes. These shoes are CUTE. And you know who I could see wearing them, and this whole look in general? Gwyneth Paltrow. Who is top of mind because Rebekah Neumann was born Rebekah Paltrow, the first cousin of Gwyneth Paltrow. Which… if you didn’t know before, now that you do, it all comes together doesn’t it? The “energy”? The “astrological intuition”? You think Gwyneth is going to watch WeCrashed? 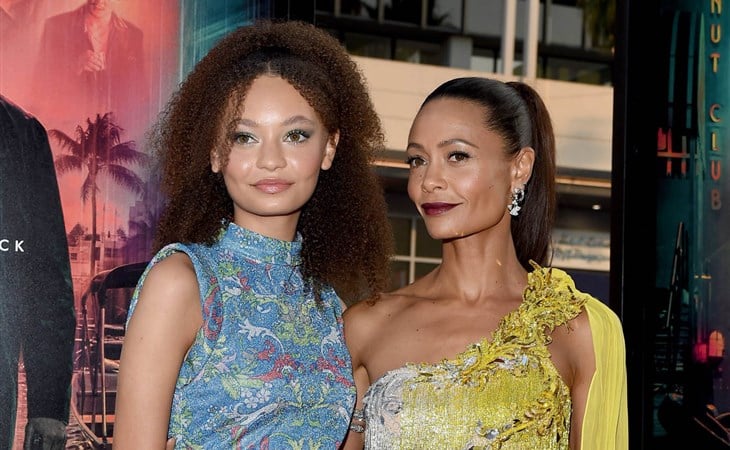