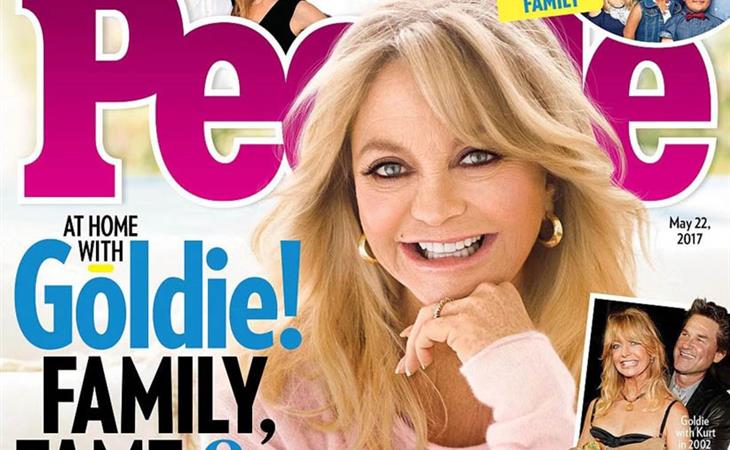 Goldie Hawn and Amy Schumer’s Snatched opens tomorrow. Goldie is on the cover of this week’s PEOPLE. Most of the early excerpts from her interview with editor Jess Cagle have been about her relationship with Kurt Russell. You know what I think about when I think Goldie and Kurt? Overboard, which I’ve mentioned before, a few times, because I love that movie so much. One of my favourite Saturday afternoon TV movies. Unfortunately this post is not about Goldie and Kurt in Overboard. (Although if you haven’t seen it yet, I highly recommend it. The scene where he’s fixing her shoe closet on the yacht and she’s wearing a white robe with Michael Jackson shoulders over a white swimsuit while smoking a cigarette from a cigarette holder is still gold to me after all these years.) This post is about the time Goldie found herself at a meeting with Al Capp who arrived in a dressing gown, gave her some acting tips, and then, well, here’s how she tells the story, in person:


This isn’t the first time Goldie has talked about their encounter. And it’s not the first time someone has accused him of sexual harassment and sexual assault. Al Capp doesn’t mean much to me. But he was a big deal cartoonist. He’s been described as a legend. He’s been described as a f-cking asshole. He was allegedly a rapist. And while he was (eventually) exposed for his grossness, prior to that he enjoyed a lot of power and influence and was enabled by a lot of powerful and influential people, including Richard Nixon, who was, oh you know, just the president of the United States. Of course he’s also left a legacy. I feel like for the people who would know Al Capp, they’ll think most of Lil Abner and not, concurrently, of the fact that this man was a predator. And it’s not like in the future, when they go through archives, there will be a footnote to those comic strips telling people that, oh, by the way? This man lured women into his home and took advantage of them. My question is: does that mean, ultimately, that he wins? New trailer and poster for Guardians of the Galaxy Vol. 2 released