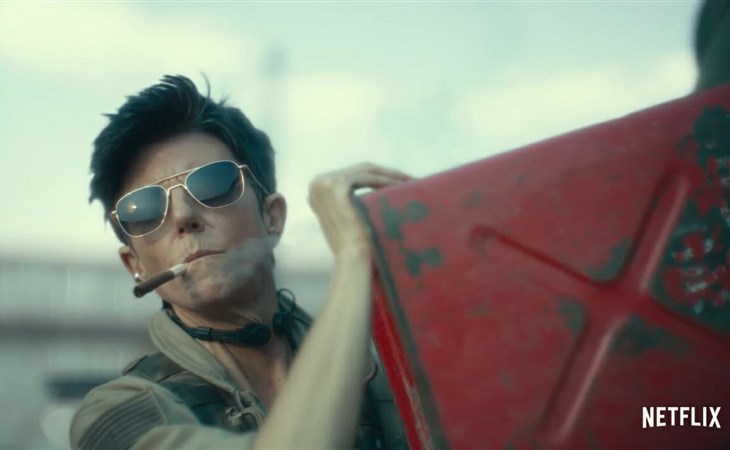 An Ode to Hot Tig

This week, Netflix released a trailer for Zack Snyder’s Army of the Dead, a heist movie set in the middle of a zombie apocalypse except the zombies are Mad Max extras. Army of the Dead originally co-starred comedian Chris D’Elia, but after he got accused of sexually harassing underage girls (accusations that now extend to child porn), Snyder cut him from the film, hiring Tig Notaro to replace him. But we’re not here to talk about that, nor are we are here to discuss the trailer—which looks whatever—no, we are here to discuss one thing and one thing only: Hot Tig Notaro. After the trailer dropped the internet was ablaze with flame emojis as #HotTig started trending. Because Tig, who has always been quite foxy, popped up in the Army of the Dead trailer looking like this:

People had Big Feelings about this photo. Many people were suddenly questioning their sexuality. Here it is as a GIF.

Look, this is not complicated. Sexuality is a spectrum, and somewhere on that spectrum is “Tig Notaro in the Army of the Dead trailer” and the sooner we accept that, the sooner we can all move on. Do you know how hot this photo is? It’s so hot I don’t even care that she’s smoking a white tip cigar and I HATE white tip cigars. There are many bad smells in the world, but white tips are among the worst. I will walk through your haze of cigarette smoke or weed without complaint, but I will cross the street to escape the stench of a white tip cigar. But not if Tig Notaro is smoking it. I’d shotgun that foul smoke right out of her mouth and say thank you after. Here’s a different photo of Tig smoking a white tip:

It’s not just Army of the Dead, though. Because Tig has been serving space face on Star Trek Discovery for the last few years. Behold:

I’m not saying that it’s a coincidence that a week after Science found the tantalizing possibility of new forces at play in the universe, Hot Tig appeared on the timeline, but I’m not NOT saying it, either. I don’t know anything about particle physics, but I find the timing of these two events HIGHLY SUSPICIOUS. Like maybe the universe is trying to tell us something, and that something is: Tig Notaro is hot. Well, we have seen the LIGHT. The truth of the universe has been REVEALED. Tig Notaro is HOT and people are SHOOK. Hot Tig has changed the shape of the universe, and we will never be the same.