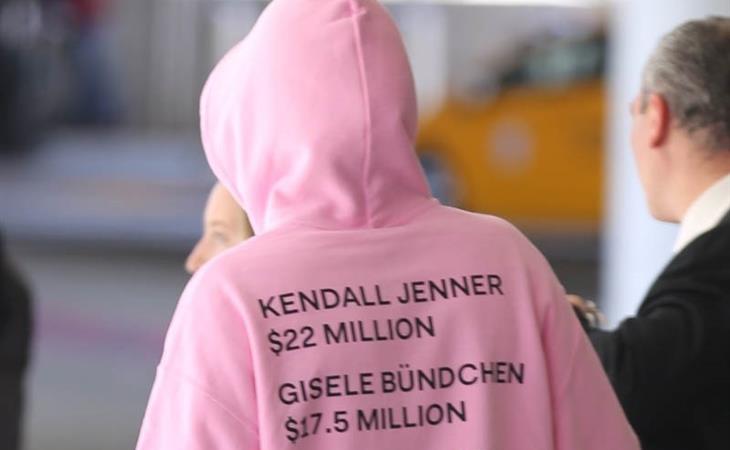 In the last couple of years, there’s been an increase in the conversations about the treatment of women in Hollywood, particularly around wage inequality and of course #MeToo. Jared Leto also has an an important topic to bring up: women who make too much money for his comfort level.

He’s been photographed a couple of times in a pink hoodie with a list of Forbes’ highest paid models displayed on the back and “America” written across the top of the hood. It’s merchandise for his band, 30 Seconds to Mars. Designing the sweatshirt like this, with a list with names and dollar amounts, is supposed to be shocking and punk. Jared Leto isn’t afraid to call out women who earn a paycheque. What a hero!

Isn’t he deep? Isn’t this just the most profound thing ever? Because what kind of monster uses their looks to make money? Oh wait.

Maybe his issue is with how the fashion industry perpetuates label-chasing consumerism and elitism. Oops…. No, I got it: Jared Leto (and, by extension, 30 Seconds to Mars) is concerned with how much money models make because there are so many criminally underpaid professions (beyond teachers, firefighters, paramedics and health care workers, there are vulnerable workers in domestic, retail and seasonal jobs). That must be why he volunteers his time for indie movies and small regional theatre productions. (What’s that you say? He got paid around $7 million to play the Joker? I’m shocked!)

We see you Jared Leto and we see what you are trying to do: shame these women for making money and shame the public for enabling it. By pointing to “America” in front of the paps, he thinks he is making some profound statement about class values. But how does he make his point? By directing his ire at women who have reached the top of their (very competitive) profession.

I looked at the other merchandise from this line; there are a few t-shirts with lists (California weed names, American brands, 7 American artists and ‘hot topics’). Only the models have a monetary value attached to their name. If 30 Seconds to Mars is trying to make a comment about class and inequality, why not use the value of one of the brands listed (like Amazon) juxtaposed with the average hourly wage of their workers?

It’s because Jared doesn’t want to shame Amazon (or Visa or Apple or Microsoft), but for some reason, he does want to call out Gisele Bundchen for charging a rate that reflects her professional value.

Forbes publishes a highest paid actors list – why doesn’t the 30 Seconds to Mars merch list George Clooney, The Rock, RDJ, Chris Hemsworth and Jackie Chan? What about tech billionaires? Or how about corporations and banks that pull off record profits while denying their workforce a livable wage? 30 Seconds to Mars had options. They chose to highlight five women who, through their own hard work, have made it to the top of their field and are paid accordingly. I don’t for a second think this was meant to be a compliment.

Please Jared, please, tell us how Chrissy Teigen is the problem with America. Please tell us how a handful of women being paid well for what they do is an injustice that needs to be rectified. Never mind that several of them own multiple business and are philanthropic; we all know that nothing good can come from beautiful women acquiring independent wealth by capitalizing on a standard of beauty that they didn’t create, but are expected to fulfill.

The cherry on top of this asshole sundae is that Jared’s band has the gall to make money off his point about women who make too much money. The hoodies are $75. 30 Seconds to Mars is using these women to boost their merchandise sales.

Jared Leto and the rest of his band (you know, the one whose music you’ve never heard) can f-ck off with this. All the way off.

(PS: Maybe we shouldn’t be surprised that Jared’s issue is with established, incredibly successful models. Doesn’t he prefer newbies?) Captain Marvel: a woman who won’t stay down 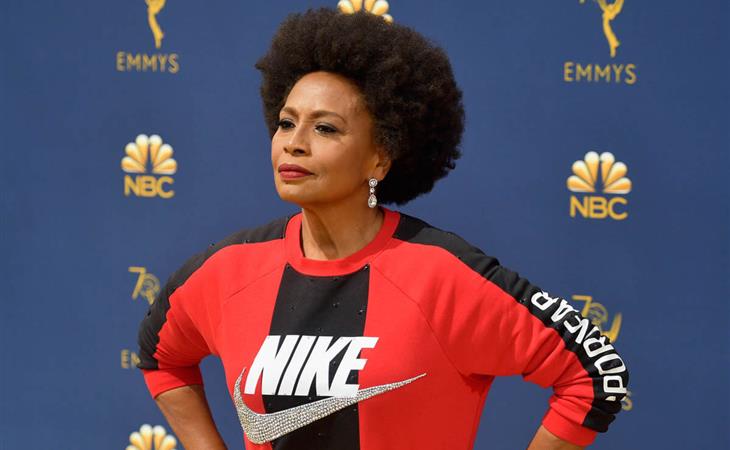