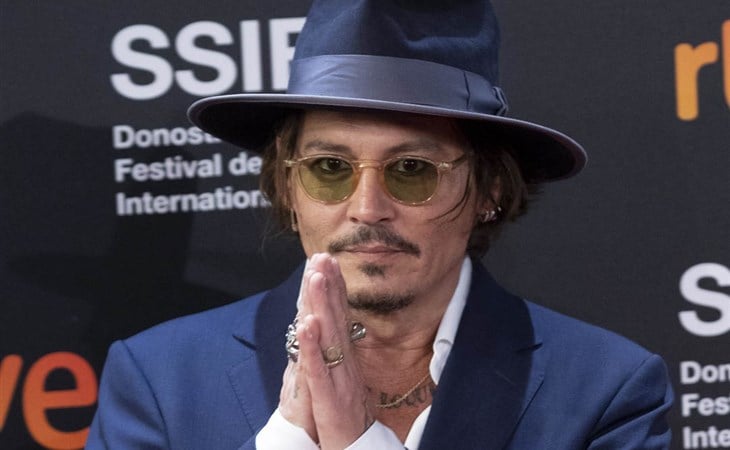 Johnny Depp was at the San Sebastian Film Festival this weekend promoting Crock of Gold: A Few Rounds with Shane McGowan, the documentary he produced. Per Variety:

“MacGowan is one among a list of high-profile, anti-celebrities that Depp is often grouped with, and the actor was asked about justifying his own mainstream persona with the anti-establishment ideals of friends such as Keith Richards, or the late Hunter S. Thompson and Marlon Brando.”

This is what we’ve always known about Johnny Depp – that, in a kind of endearing way, he’s basically just a fanboy. He idolises a specific type of anti-hero, and like any fanboy, he has tried to remake himself in that mold. It’s relatable. I mean he wouldn’t be the only person out there who desperately wants to be like their fave. What’s tricky about that, for anyone, is that sometimes that’s just not authentic to who you really are. And then there are layers to identity and authenticity. Since so many of us have digital selves these days, who we think we are and who we are perceived to be are constantly being rebalanced in relationship to who we actually are. And that’s especially true for celebrities, particularly a celebrity as famous for as long as Johnny Depp has been. So here’s how he answered the question about “justifying his mainstream persona”:

"First and most important is to never consider yourself a Hollywood celebrity,” he replied, as quickly as any of his responses on the day came back. “That’s death and grotesque.”

“I’ve always been drawn to…” he started, before taking the day’s longest pause to choose his words carefully, “people who are diligent in remaining themselves.”

Johnny’s idols are ostensibly all rebels, outcasts, and disruptors. And this is the space that he seems to think he occupies as well. Can you make hundreds of millions of dollars from Disney by playing a pirate and still be punk as f-ck? I can see why Johnny doesn’t “consider [himself] a Hollywood celebrity” or why he might not want to. Celebrity is often associated with artifice and, at least by old school standards, bound to a life of palm trees and pools, chained to the spotlight by diamond necklaces and pearls. I mean, this is a dude who still uses the word “turd”, you know? And his heroes were all in their primes in the 60s. There is a possibility that his worldview is preserved in amber (no pun intended) from a certain period.

So no, Johnny Depp certainly isn’t an Elizabeth Taylor kind of celebrity. But he definitely benefits from celebrity. Here’s a simple example: his lateness. Johnny was notoriously unpunctual while working on the Pirates of the Caribbean franchise. He was getting paid millions and he’d not show up until hours after he was supposed to, meaning hundreds of cast and crew had to sit around waiting for him. They all had to work around him. And there were no consequences for him. Very few people can get away with that. But celebrities can. And that’s just one example of the privilege afforded to Johnny because he is a Hollywood celebrity. Getting a late pass over and over again is actually one of his lesser privileges. Perhaps his greatest privilege is being able to, as a celebrity, who is wealthy and powerful, surround himself with people who don’t challenge him, who only encourage his whims, a team that only has one answer – “yes, no problem”. That is the privilege that begins to shape a mind, that begins to change a person, even those who “are diligent in remaining themselves”.

For more on Johnny Depp at the San Sebastian Film Festival and Crock of Gold, read the full Variety piece here.