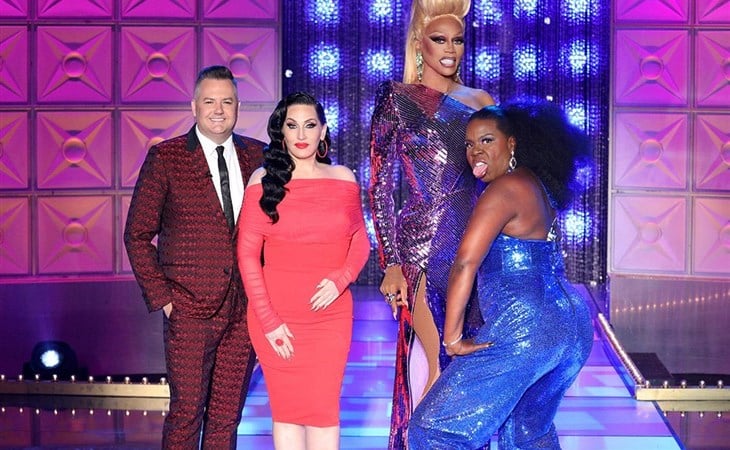 Friday’s episode of Drag Race was a rollercoaster, and the elimination shocked and surprised fans. For many, Rock M Sakura was a favourite they were sad to see go, but for many others, her elimination (and even her placement in the bottom two) was completely unjustified. (Side Note: This is a good time to reiterate that tearing other queens down and sending them hate because of bad judging or reality TV bullsh-t is NOT okay.) In the Drag Race subreddit, I saw comments calling out producers, lamenting the state of the show, and even people saying that they no longer felt like watching the season. I too am incredibly disappointed at the result, but hopefully this bodes well for Rock M’s future career. I wouldn’t be surprised if she’s able to snag Miss Congeniality even though she’s only been in three episodes.

If there was a ray of light through the darkness of Friday’s episode, it was Leslie Jones’s appearance as guest judge. SHE WAS AMAZING! One of my many celebrity-related goals is to be a judge on RuPaul’s Drag Race. (I’m still delusional and crossing my fingers for Drag Race Canada.) After Friday however, my new goal is to meet Leslie.

Leslie live-tweets every episode of Drag Race AND Untucked. It’s some of the funniest sh-t on Twitter. This started back in 2018 when she first binge-watched the show and sent probably the most innocent, pure tweet I have ever seen:

need help y’all. Where can I find all of @RuPaulsDragRace episodes with the untucked show added to it. @RuPaul I can only find certain seasons but not both. Im probably just gonna but all the episodes on iTunes but I feel like I’m not looking in right place. Help I’m addicted lol

Soon Leslie was a superfan, even commenting on which of RuPaul’s runway walks were the best. However, Leslie’s crowning moment and solidification as fan favourite was when she tweeted at Willam about his surprise elimination in Season 4. Everyone and their grandmother had been wondering what really went down and thanks to Leslie, we all found out. The tea was scalding.

Then, in August of 2018, Access Hollywood surprised Leslie during an interview with a personal invitation from RuPaul to join as a guest judge.

Mama Ru came through and made @Lesdoggg's @RuPaulsDragRace dream come true! 👑 We surprised Leslie with a surprise message from @RuPaul and her reaction was EVERYTHING pic.twitter.com/RBZmCnQ8xg

Season 11 had already wrapped at that point and so Leslie was slated to be a guest judge on Season 12. Which brings us to Friday night’s episode.

From the moment she’s on screen, you can tell that Leslie’s there to have a good time and to unabashedly show everyone how happy she is to be there. Her genuine excitement and wonder of being on the show are so entertaining and infectious that it is literally impossible not to smile when she’s on screen. She even sings along to RuPaul’s entrance song and FILMS IT!

I loved Leslie Jones before this, but I am now officially stanning. If we weren’t all social distancing right now, I’d fly to New York and hug her. And I’m not the only one that feels this way:

Truly didn’t appreciate the majestic essence of Leslie Jones prior to last night’s ep. Now I realize what a fool I’ve been. Stan Leslie from this day forth unto infinity. from rupaulsdragrace

People are even calling for her to be a permanent judge. I’ll start the petition.

The coolest thing about Leslie’s appearance was her respect for the show and for the queens themselves. I haven’t been watching Untucked this season, but I literally bought the episode with her in it just because of all the clips I saw where she interacts with the queens. She is effusive with her compliments and seems as excited to meet the queens as they are to meet her. She even says to them, “You have to know that I think that drag queens are angels from heaven. I think you guys are the best of both worlds, and you guys are so creative. Please don’t stop doing what you’re doing because you’re helping us be creative. And I just want all of you to know how important you are to this society.” Those are the words of someone who truly appreciates the art of drag.

Sometimes appreciating someone’s art also means giving them the truth that they need. Like when she focuses on Aiden Zhane. It’s a powerful interaction that you just need to watch.

"None of it matters where you come from, it's about what you bringing.”

Someone please get this woman her own self-help TV show IMMEDIATELY.