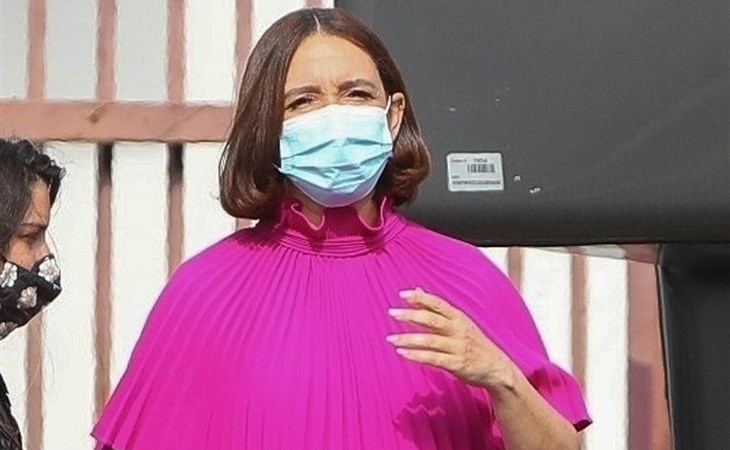 Here are photos of Maya Rudolph in a fuchsia dress and horrible crocs “on set” for “Human Resources”. Why the quotations? Because I think these photos might be mislabeled. Human Resources is a spin-off of Big Mouth centered on the hormone monsters and other imaginary creatures of Big Mouth. Rudolph’s hormone monster, Connie, and Nick Kroll’s hormone monster, Maury, are the stars, but it will also feature David Thewlis returning as the Shame Wizard, and new characters voiced by Keke Palmer, Aidy Bryant, and Randall Park. Does Human Resources sound like Monsters Inc. but with swears? Yeah, kind of! Am I going to watch it anyway? You bet!

But like Big Mouth, Human Resources is animated. So there is no set for Maya Rudolph to go to, only a studio to record her dialogue, let alone costumes for her to don. And that pink gown is definitely a costume, Maya Rudolph doesn’t dress like that on her down time. I think these photos might actually be from the set of the as-yet-unnamed Apple TV+ project from Alan Yang and Matt Hubbard in which Rudolph plays a woman whose husband leaves her over $80 billion. In that context, doesn’t that pink gown look like something a billionairess would wear? (Not the crocs, I assume she has costume shoes, which are probably uncomfortable, to wear as well.) Or, Human Resources has a live action component, in which case, I take it all back.