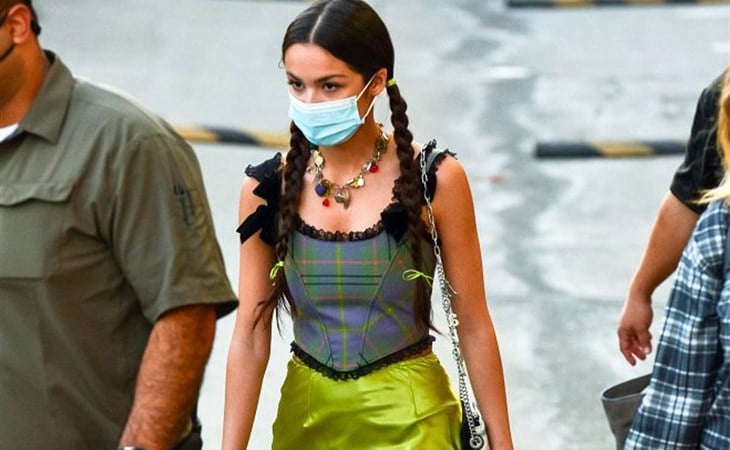 The American Music Awards nominations were announced today. The show will air on Sunday, November 21. And it’s no surprise that Olivia Rodrigo, one of the breakout stars of 2020/21, leads all artists with seven nominations, followed by The Weeknd with six. Olivia’s biggest hit is “drivers licence” but she’s had multiple hits off her debut album Sour, and the album itself is one of the most successful releases of the year; she’s the new star of the music industry. And it’ll be interesting now that award season is starting, as we get closer to the Grammys, still considered the biggest award in music, how much of a factor she will be.

Here’s Olivia at Jimmy Kimmel the other day in a corset and a chartreuse skirt with combat boots. I LOVE this look, and I’ve loved it for…what?... like 20 years? Since Gwen Stefani’s era? Olivia’s been heavily influenced by the 90s, and this is what is defining her current era. For the next album, I’m curious to see where she goes.

One of Olivia’s seven nominations is for Artist of the Year, no surprise. The other nominees in that category, which of course is one of the top categories at the show, are Taylor Swift, Ariana Grande, Drake, The Weeknd…and BTS.

Well, sh-t. Of course I agree. But I’m not sure I can say I expected it? As we have seen, over the last few years, these award shows have tried to include BTS as much as possible – in less high-profile categories – in part because they know BTS’s influence on social media with the reach of their ARMY. Oftentimes though, their acknowledgement of BTS rings hollow because the group is often nominated in “other” categories, seen by many to be less prestigious, and not positioned alongside their peers in the recording industry (and by peers I mean the big name brand name top commercial artists) when their achievements are equal to and often surpass them.

So it’s interesting to me to see BTS nominated for Artist of the Year at the AMAs. They’ve had SIX #1 hits on the Hot 100 in the last 14 months alone – SIX NUMBER ONE HITS in just over a year – of course they deserve to be there. They deserved it last year too. But this is the very first time they’ve received a nomination in the Artist of the Year category at a western award show. Will there be more?

It makes sense though that this is happening at the AMAs. It was at the American Music Awards in 2017 that RM, Jin, Suga, j-hope, Jimin, V, and Jungkook made their US award show debut with a thrilling performance of their song “DNA”. And they were invited back in the years that followed. Will they be back this year? They posted about their three AMA nominations today:

And it just so happens that they’re playing four shows in Los Angeles a week after the AMAs so there’s now speculation that they will return to the AMAs stage for their first live in-audience award show performance since the start of the pandemic. Seems likely, right? Dune: Grey is for Drama