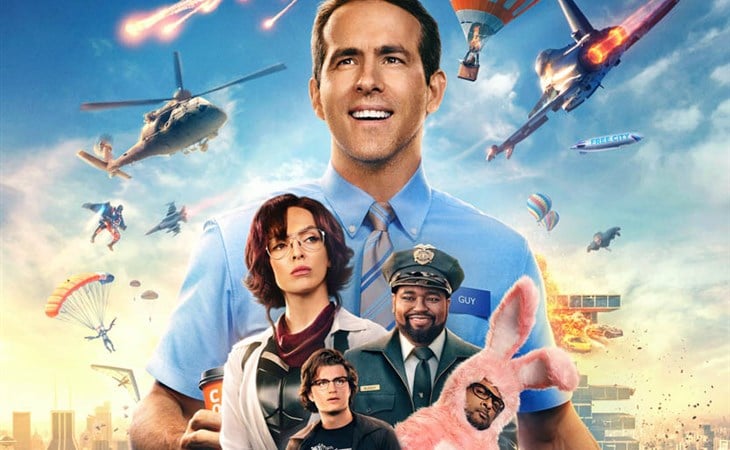 In Free Guy, Ryan Reynolds stars as Guy, a non-player character in an open-world shooter game called “Free City”. Within the world of the game, Guy and all the other NPCs are unaware of their artificial reality, they just think it’s normal for the bank to be robbed every day, for the “sunglasses people” to run amok, doing whatever they want with no apparent consequences. Like Jumani: Welcome to the Jungle before it, Free Guy (scripted by Matt Lieberman and Zak Penn, and directed by Shawn Levy—probably best known for Stranger Things at this point but also the director of the Night at the Museum trilogy, making him no stranger to studio action-comedies) isn’t adapting a specific game, but instead uses the form and style of video games to tell its story. Given the flop-to-hit ratio of video game adaptations, this might be the way forward for video games as cinema—don’t adapt games, adapt the way games tell stories.

In Free City, mayhem is constantly unfolding, but Guy goes about his day, catching up with his best friend, Buddy (Lil Rel Howery), and patiently waiting out the latest robbery at the bank in which he works. He orders the same cup of coffee every day and has a closet full of identical clothes, but none of this strikes Guy as odd. His life begins to change, though, when he spots a woman singing Mariah Carey’s “Fantasy” to herself on the street one day, and he stops to comment on the song. The woman is clearly expecting Guy to say something else, and this is the first hitch in Guy’s routine, and from here his life begins to branch out into new, unexpected directions. The woman is MolotovGirl (Jodie Comer), one of the “sunglasses people” in Free City, and Millie in the real world, a game developer trying to find proof that her copyrighted code is being used illegally in Free City’s build. Do you have to know much about video games to follow this plot? No. Free Guy does a solid job keeping the mechanics of games and the plot simple.

Determined to catch MolotovGirl’s attention, Guy picks up a pair of sunglasses and learns there is a whole other reality within Free City, where the sunglasses people are rewarded for doing things like bank heists and punching civilians. Free City is very clearly based on Grand Theft Auto, but it asks the question of what would happen in a game like GTA if someone played it “nice” instead of like an asshole, as intended. Guy doesn’t want to rob banks or punch the shopkeepers he interacts with every day, so he goes about Free City stopping carjackings and preventing violence and becomes known as “blue shirt guy” to players in the real world, who think he is the result of an in-game hack. Free Guy is loaded with cameos from popular gamers, of whom I recognized zero, as I do not stream people playing video games. But if you are into that, or you have kids who are into that, spotting the cameos will probably add another layer to the film.

The pro-kindness message of Free Guy is clear, but it also comes with a collective action bent that is especially meaningful right now, when so much of our public lives depends on community action for public health. The selfish, self-interested side of the coin is represented by Antoine (Taika Waititi, chewing up a comedy villain role), the CEO of the gaming company that makes Free City. He’s materialistic, rude, abusive toward employees, all the bad things, basically. The only person who seems to like working for him is Mouser (Utkarsh Ambudkar, really deserving starring roles), a programmer who wants the money and lifestyle Antoine has, at least to a point. Free Guy isn’t subtle about making its point, but that doesn’t mean it’s any less satisfying when Mouser starts making less self-interested choices.

The love story between Guy and MolotovGirl is equally unsubtle, but it is interesting that it hinges on Guy coming up to Molotov’s level in the game. He is not only earning literal points, but he does things simply because they are helpful to her, and this is how he demonstrates his interest. He is constantly admiring her greater capability as a sunglasses person, is impressed by her achievements, and has no agenda of his own except to advance her agenda. Reynolds plays Guy with wide-eyed charm, his action-hero persona sublimated into a rom-com cheeriness that works perfectly within the dual realities of Free City. In a worse movie, Guy would be the snarky asshole main character of the game, but the entire premise of Free Guy is that Guy is an everyman trying to keep up with the coolest girl in the room, a plot point echoed in MolotovGirl/Millie’s real life, too.

Of course, Free Guy is loaded with non-stop jokes and visual gags—including one that makes me pine for the days of sold-out theaters, if only to absorb a large crowd’s reaction—but the sweet, heartfelt underpinning of the story balances out the rapid-fire comedy. It’s a best of both worlds scenario for Ryan Reynolds, letting him play the action guy he’s become known for, while also tapping into his rom-com roots and letting him play a lighter, sweeter character. And Jodie Comer looks like she’s having fun, playing the kind of character Villanelle might imagine herself as within the world of Killing Eve. Free Guy is free-wheeling and irreverent, a mash-up of game and movie references and jokes, and it has a surprisingly genuine heart of gold.

Free Guy is now in theaters. 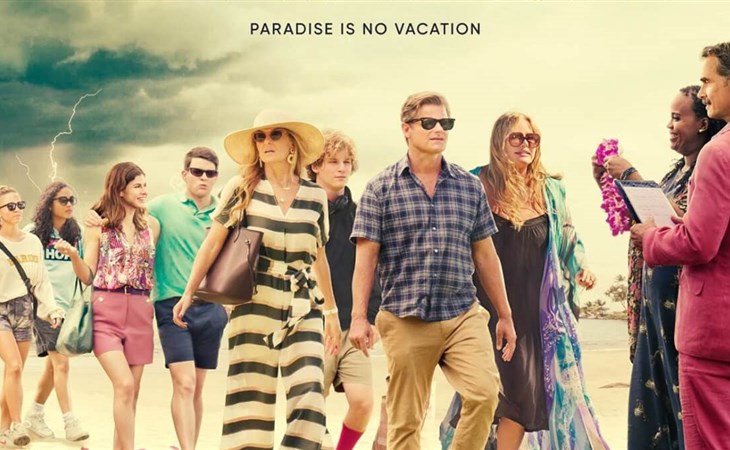