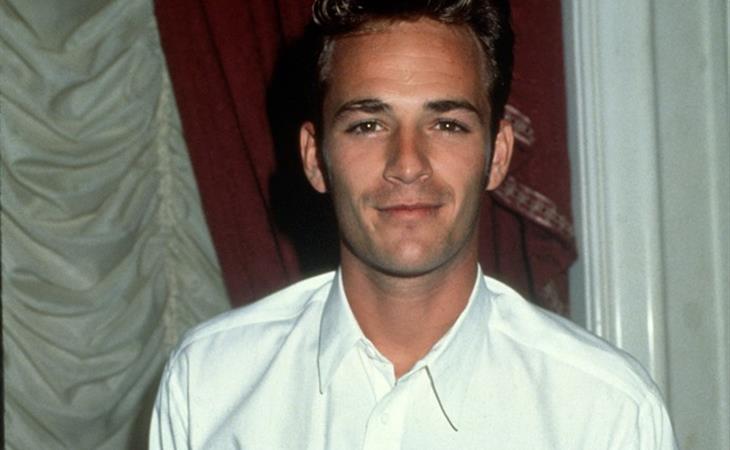 Yesterday, like everyone else who came of age in the 90s, I mourned Luke Perry. He was beloved for his arc on Oz, his self-deprecating appearances on The Simpsons and SNL, and his fully-realized three-dimensional Fred Andrews on Riverdale – but, as he said himself, he was, and forever will be, linked to Dylan McKay.

It’s staggeringly sad. Because he was so young, and seemed young, even playing KJ Apa’s dad. Because he never seemed to age in his attitude, his lovely swagger, even as he got greyer. And because tweet after tweet reinforced how lovely he was – stories not just from his costars, but from ‘regular’ people who knew him, which are even sweeter:

Luke Perry was a truly lovely next-door neighbor to my grandfather and aunt. Like, he came over to replace light bulbs all the time. Sending so much love to his family. This is the worst.

I knew Luke Perry as my 92yo father's very kind and helpful neighbor. He changed lightbulbs, took out trash cans and was an all around great guy. So sorry for his family!

Y’all might know Luke Perry had some land here in Tennessee. Maybe you don’t know that during the flood of 2010, he was out there bringing people food, bottles of water, and shoes. Just a humble, decent dude. pic.twitter.com/BEefrMYfM2

These memories are so affecting because they confirm our shared gut feelings that Luke Perry was a rare breed of wonderful, empathetic, and lovely. Yet I spent yesterday wondering how we knew that, exactly, since all we really knew (and lived and breathed) was Dylan McKay, that drawl and those eyebrows. I know better than to judge an actor by his character, so why did Luke Perry feel so different?

Then it came to me in the middle of the night, and I’m not ashamed to say I teared up:

Luke Perry made it possible for Dylan McKay to love a strong, complicated woman.

I was 10 years old when Beverly Hills, 90210 premiered. Too young to be in its target audience, plus I wasn’t allowed to watch TV – but 90210 was my fictional coming-of-age; the show that made me bargain, lie, sneak around, do whatever I had to to get it.

Much of the allure, originally, was Shannen Doherty’s Brenda Walsh, the first imperfect-yet-desirable girl on TV. She was outspoken, like me. She made mistakes, like me, bratted at her parents, like me, flew off the handle at her friends and brother, sometimes unnecessarily, like… you get it. She was intensely relatable, and so refreshing on her own.

But it reached another level altogether when Brenda was loved, flaws and all, by a strong, confident man.

Dylan McKay read Byron unapologetically, and didn’t see any conflict between that and being a highly sexual surfer. He was honest and (mostly) responsible about his alcoholism, about his money, and about other human beings, even the ones he wasn’t sleeping with. In the era of Zack Morris, Ferris Bueller, and Parker Lewis, Dylan attended class regularly without anyone prompting him. He was absolutely presented to us as a ‘dangerous’ motorcycle-riding bad boy, but also as a young man who was taking care of himself, and knew his own mind.

There are far, far worse things for the impressionable tween girl to idolize.

Brenda had health scares, and Dylan was there. She was insecure about her looks, about her virginity, and Dylan stayed. She mused about her future, and he dreamed with her. Brenda’s father, and to a lesser extent, her mother and brother, actively worked to end the relationship, and Dylan was there. He worked through arguments with her, and genuinely loved her company, not just her body. He didn’t blow off meetings with her father for video games – he stood his ground for the woman he loved, even if that woman was a petulant teenager who was fond of stomping.

It was incredibly heady stuff. All of it almost too good to be true, of course – Dylan McKay could easily have become a Manic Brooding Dream Boyfriend, except that Luke Perry made it real.

Look, you can write the best script in the world, but trust me that I have seen great scenes die because the actors don’t believe what they’re doing. If they feel they’re above it, or can’t commit to the real feelings in the scenes, they will be flat, forgettable cardboard. Luke Perry really believed a teenage boy could be that great. That smart, that sensitive. That much in real, honest-to-goodness love.

I once read a quote where he said he thought being older than his character was helpful, because it allowed you to have perspective on tumultuous teenage emotions. Clearly his perspective didn’t diminish anything – those feelings we felt with Dylan and Brenda were real. Parts of 90210 were ridiculous, but he elevated the truth between Dylan and Brenda far beyond expectations for a ‘teen soap’. Luke Perry (and Shannen Doherty, they were so great together) played their love honestly, with ups and downs and misunderstandings, but so much genuine affection, that it became real and aspirational to all of us. It was the first example of Luke Perry respecting his fans as fellow human beings, who deserved honesty, from the very beginning.

Luke Perry truly believed Dylan could love a complicated, mercurial, initially-virginal brunette for who she was – I can’t overstate how rare that was at the time. And because he believed it, we believed it could be true in our own lives: that we deserved boyfriends and girlfriends who were into us for who we were.

Obviously, when put into practice, this had mixed results – and though I am staunchly and only “The Brenda Years” (Lainey: COSIGN!), I think Dylan’s sincerity got harder to come by as the show became more ridiculous – but that early imprinting did its job. Our love for Luke Perry,  our sorrow over his death, is because he played Dylan as a reality; he proved, over and over again, that he felt teenage boys and men were capable of being that reality, or parts of it. I was young enough to believe it wholesale, and to expect that there were people like that out there, which is a gift I didn’t fully appreciate at the time.

In fact, maybe keeping it real was his greatest gift, as evidenced by Emma Caulfield’s memory of him…

My first day on 90210 Luke brought me under his wings & made me feel welcome. His first words to me were “so how are the bitches treating you ?” It made me laugh & I felt like I had an ally in my corner. You set a tone and made sure I could thrive. It was my first real gig and..