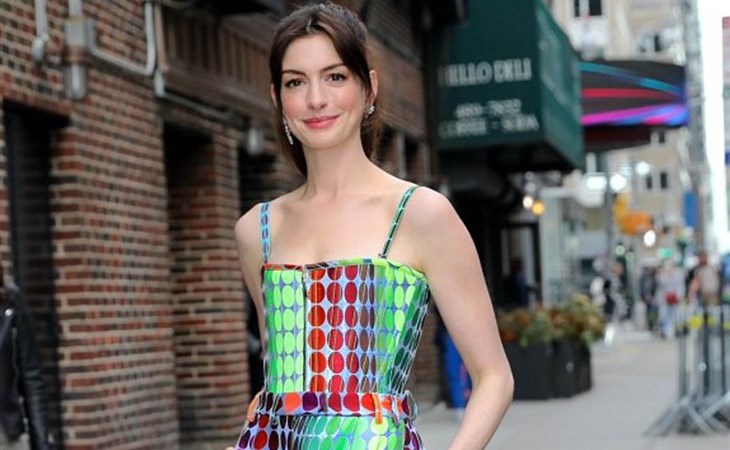 Anne Hathaway is currently promoting WeCrashed, premiering this weekend on Apple+. Anne and Jared Leto play Adam and Rebekah Neumann, the WeWork scam couple, and while Jared’s doing another accent fresh off House of Gucci, Anne’s coming in with a new voice for her role, too. It’s not as evident in the trailer but there’s a clip that plays during Annie’s interview on The Late Show with Stephen Colbert last night where you can really hear it. (The clip starts at about the 6 minute mark of the first video embedded below.) So, we now have two current series about scammers featuring the lead women speaking in a lower register – Amanda Seyfried as Elizabeth Holmes and Anne Hathaway as Rebekah Neumann. I just googled some footage of the real Rebekah speaking; it doesn’t sound like she’s putting it on the way Elizabeth did but her voice is definitely different from Annie’s natural voice.

Right after the clip plays, Colbert asks Annie about “meeting” Jared Leto for the first time this past weekend at SXSW. They shot for months together…but he was in character THE ENTIRE TIME, so it was only just days ago that Annie was able to engage with the “real Jared” and not Jared playing Adam Neumann or Paolo Gucci, LOL FOREVER.

The way she tells the story is amazing. She very clearly says she understands that it’s his process and enjoyed their collaboration, but she also manages to subtly acknowledge that for people who aren’t actors, this is f-cking weird, and a f-cking eyeroll! It’s this comment that kills me:

“I really respect Jared’s process and I had a wonderful time working with… whoever that was.”

That alone is worth watching this interview but then she goes on to tell a story about how she couldn’t resist doing the “Father, Son, House of Gucci” in his face when the trailer came out and it’s actually kind of genius the way she describes his reaction – which is that he split into three people, like a horcrux: Jared, Paolo Gucci, and Adam Neumann, and then she re-enacts the moment and it becomes like the Matrix, you know when Keanu Reeves is dodging bullets or doing whatever Matrix moves and splits into multiples? That, apparently, is what happens to Jared Leto when you overload his bandwidth and his characters converge. Because, yes, he’s just so f-cking Method.

Sarah has already recently written about male actors and their Method f-cksh-t and the only thing I’ll add to that is what Annie said herself with Colbert and why she doesn’t get so immersive, especially not anymore: because her children want to see their mother and not whoever their mother is playing. As Sarah noted in her post about Tom Hardy being a f-cking asshole on the set of Mad Max: Fury Road, women often don’t have the luxury of going full Method jackass…or at least this warped version of full Method jackass. Beyond the fact that women would not be praised for walking around a set demanding to be spoken to only in character and behaving in the most unpleasant way (imagine if Meryl Streep while making The Devil Wears Prada just walked around throwing her coat at people and firing them if they couldn’t find the next unpublished Harry Potter manuscript), there’s also the reality of what Annie is talking about here: family, relationships, real f-cking life that isn’t going to accommodate your goddamn artistic process.

PS: I really like Annie’s dress – not necessarily the colours and the stripes but the construction of the top part, how it’s stiff like a board. Very Tudor, which I’ve always been into. 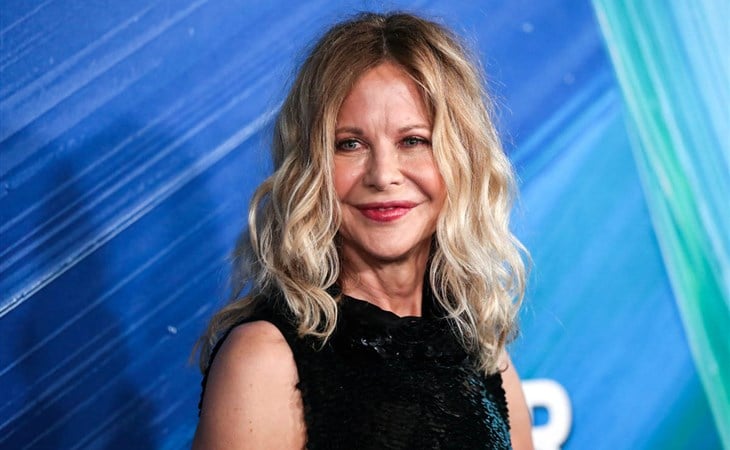 Hey, Meg Ryan is back!