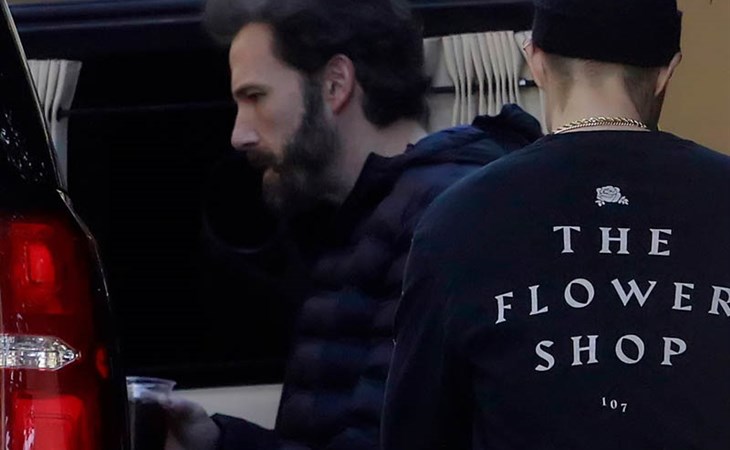 Ben Affleck’s kept a pretty low profile this year, ever since it was confirmed in January that he and Ana de Armas are no longer dating. When it was first reported that the two had ended their relationship, the Love Story of 2020, there were some suggestions that it may not be totally over between them, that there was a good chance they could get back together. This hasn’t happened…at least not yet.

Here’s Ben leaving his home, picked up by a driver this weekend. Usually that means he’d be heading out of town. And that makes sense – he left LA presumably on his way to Boston, because that’s where George Clooney is as production has now started on The Tender Bar. Here’s footage of George directing on set in winter conditions:

Ben appears to have grown out his hair a bit for this role. He’s playing JR Moehringer who wrote the memoir on which the film is based. As I wrote when the project was first announced, The Tender Bar was my favourite book of 2006. It’s about community and home, about how we create a home out of the places that take care of us – sometimes it’s a school, sometimes it’s a workplace, a mahjong den, it can be on the field, and in Moehringer’s case it was the neighbourhood pub. I haven’t re-read The Tender Bar in a while but in my memory of it, there’s also a discussion about mentorship in the story, specifically male-to-male mentorship, an exploration of role modelling and emotional connection. So this has the potential to inspire a great performance from Ben, especially after what he was able to bring to his film from last year, The Way Back, in which he played a recovering alcoholic putting his life together. This time the story is set in a bar, and it’s not necessarily about what’s consumed there but how, over a few beers a few times a week, you can make a profound impact on someone’s life.

Obviously with his history, there might be some curiosity about how that might affect Ben, but the story isn’t really about drinking; rather the focus is on the environment, on the relationships that are forged in that space. And I’m really curious to see how both George and Ben deep dive on that theme, considering that both of them have famous friend circles of their own, and have each, as they have shared, relied on those networks to navigate personal highs and upheavals. If this lives up to the possibility, we could be looking at an upcoming award season storyline, maybe next year: George Clooney directs Ben Affleck to his first acting Oscar? Sam Heughan and The OTHER Red Notice