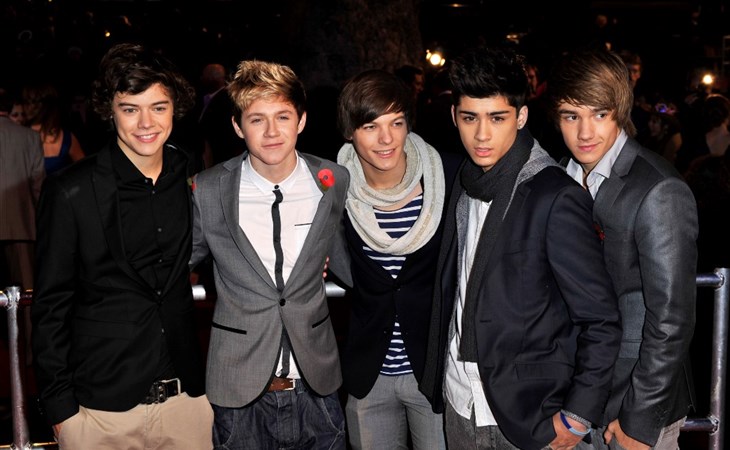 1D is 10! Harry, Liam, Niall and Louis are celebrating a decade of the boyband journey, from reality TV show to solo careers. The nostalgia is thick: the huddle shot, the first group photo, the text. It’s a photo montage set to “Story of My Life.” They were babies! And the oldest of them, Louis Tomlinson, is only 28. The question hanging over all this is: Will Zayn show up (virtually) to commemorate the occasion? You never know when Zayn will pop up.

We need to wear masks, social distance, and wash hands if not for ourselves, then for Diplo. How much longer can he throw his hands up in the air like he just doesn’t care in his living room? He needs to get back to his natural habitat (a sticky DJ booth in Las Vegas).

Speaking of masks, what about these ones is so disturbing? I think it’s the teeth.

Flip through to see a tutorial on how to fix a burn mark on a carpet. The whole process looks really complicated and at the end, instead of a burn mark there’s a black spot. This is Drake, who keeps a closet of Hermes bags for fun – why didn’t he just replace the rug?

Yesterday I wrote about the We Are Angel City ownership group and forgot one key person – Alexis Olympia Ohanian Jr. At the age of two, she is the youngest person to ever co-own a professional sports team. It also got me thinking about celebrity investments: remember when restaurants were really hot? Everyone had one in the early aughts. I think sports teams are the new restaurants.

Chelsea Handler paid homage to Martha Stewart’s thirst trap and Martha’s responded with a WASP sting. “I think my pool is a bit prettier than yours”  and “my facial expression is a little more relaxed” hahahahahahahahahha. Do not f-ck with a Martha when she is thirst trapping.

Megan Fox and Machine Gun Kelly were on a podcast hosted by Randall Emmett (the director of the movie they are shooting) and his fiancé Lala Kent (from Vanderpump Rules). Megan told them that she had a gut feeling about MGK before they even met and that she believes they are twin flames – one soul split into two. These two have gone deep in a few months. Fast flames or twin flames?

There have been several stories that Kim and Kanye’s marriage is circling the drain. Celebrity divorces, even big ones, happen all the time. That’s not really the story here. The story is Kanye and how to cover (or not cover) his current state. This is something that I’ve been watching because we’ve seen this pattern before with other celebrities. Did we learn anything from Britney Spears and Amanda Bynes? Or is the entertainment industry just repeating the same mistakes (shining a spotlight on someone in crisis) through a faux-woke lens of “concern.” It’s something I think about a lot – in 2007 we didn’t leave Britney alone. Has anything really changed or did the language just get more palatable?