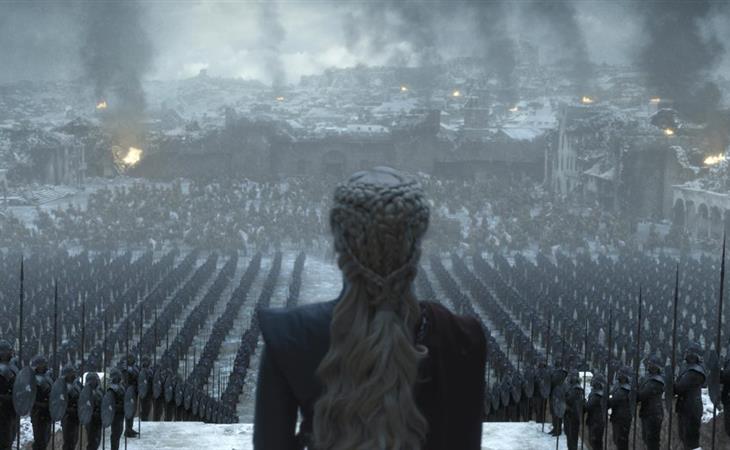 There have been several series this year that have stuck their landings: Crazy Rich Girlfriend and Broad City first, then Veep last weekend. Did Game of Thrones stick the landing? Did it have to? Maybe the better question is what they thought a stuck landing looked like vs what the audience was expecting a stuck landing to look like.

If we’re talking about cinematography and spectacle, the finale episode delivered on some truly magnificent shots, one in particular will go on and be memed forever.

THIS. SHOT. of. Dany. My god. #GameofThrones pic.twitter.com/Jkr3XpBfIg

If we’re talking about story though…

This is what Tyrion rhetorically asked the council. His answer: “Stories.”

Tyrion was referring to who best to nominate as the new king. But it’s also how Game of Thrones is being judged. If storytelling was the goal, I don’t know if we can call it a stuck landing. If we’re sticking with the figure skating metaphor, they stuck the landing, sure, but only after popping the intended triple axel. The ending may make a lot of sense (and Sarah’s analysis is coming up) but the storytelling that got them there didn’t support it.

Emilia Clarke spoke to The New Yorker a few days ago for an interview that was released just as the final episode of Game of Thrones concluded last night to talk about how she felt about Daenerys Targaryen’s arc. The piece opens with how she worried about disappointing Beyoncé – it happened at Beyoncé and Jay-Z’s now annual Oscar after-party, now known as the best Oscar after-party:

“I see this vision, this angel, this incredible woman float towards me,” Clarke recalled the other day. “I can’t quite control myself. And Beyoncé says to me, ‘Oh, my goodness, it’s so wonderful to meet you. I think you’re brilliant.’ I just couldn’t handle it! I was on the verge of tears. I could see myself reflected in her eyes. I could see her go, ‘Oh, no. I misjudged this. This girl is crazy and I’m not going to have a real conversation with another celebrity. I’m having a conversation with a crazed fan who’s looking at me like a rabbit in the headlights.’ Which is exactly what I was. I said, ‘I’ve seen you live in concert and I think you’re amazing and wonderful! Wonderful!’ And all I wanted to scream was ‘Please, please still like me even though my character turns into a mass-killing dictator! Please still think that I’m representing women in a really fabulous way.’”

Does Beyoncé think they did Dany dirty? I would think so, yes. Would she hold it against Emilia Clarke? Of course not. Emilia Clarke acted the sh-t out of her scenes this season. She made those scenes better than they deserved to be.

That’s two formidable women who play two of the most intriguing characters on television named to the TIME 100 talking about their work in terms of pleasing Beyoncé in the space of a month. The other one was Sandra Oh.

Beyoncé of House Knowles, First of her Name, the Irreplaceable, Queen of the Stage and the First Children of Destiny, Khaleesi of the Lone Star State, She Breaks Chains All By Herself, Mother of the Blue Ivy Carter and the Holy Twins, and now…the Golden Totem for Women at Work.

More on Game of Thrones to follow and some royal and YouTube gossip before I wrap on this light day of posting.