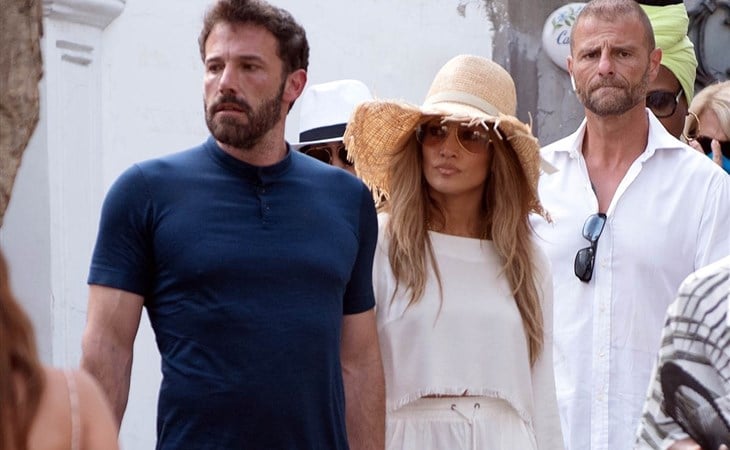 Bennifer Summer: A Frenzy in Capri

After a few days in St Tropez, the Bennifer Summer tour has touched down in Capri! Here they are, walking through town, Ben Affleck and Jennifer Lopez, hand in hand, JLo in all white to show off that glow, that skin, and Ben in a fitted shirt, as fit as he’s been in a while, and they’re laughing and seem happy and relaxed… despite the fact that people clearly went bananas over their presence.

So they’re still celebrating JLo’s birthday. You know it hasn’t even been a week? Last week at this time she was still in LA. But with all of these pictures, and these moments, it feels longer…even though it’s only been a few days. They’re giving us maximum satisfaction, LOL. And fun!

Because part of the fun for a lot of people is theorising about whether or not these two might be up to something that’s more than just being in love again. She has a whole entourage with her – are they shooting something? Are they documenting their romance? Is this for some kind of anniversary? Is the fact that she’s wearing heels in Capri instead of flats, which would be more practical on cobblestones, a sign that this is partly for show? Haha, as if practical is a concern for JLo.

And yet… even if it is for show, as a member of the audience, the show must go on!

The moment they got back together, it was always going to be a show, whether or not they participated. But this is even more interesting considering the new Matt Damon profile in the NYT Magazine that I just posted about earlier today. In the piece, Matt and Ben’s public personas are compared and contrasted, with the intended point being that Matt, in seeing what Ben has been through in the media, has chosen to avoid that noise. Back in 2002/3, during the first Bennifer frenzy, part of Ben’s struggle was that he felt that it was ruining his career. Both Matt and Ben were asked about this for the article:

“Damon says Affleck confided in him that “I’m in the worst place I can be. I can sell magazines but not movie tickets.” He worked hard to rebalance that equation.

Affleck, who wrote “The Last Duel” with Damon and Nicole Holofcener and also acts in the film, understandably had reservations when I raised this subject with him. “In your asking about it there’s a subtle implication or judgment,” he said, “that I chose to seek out attention, and Matt didn’t. He and I have both assiduously tried to maintain our privacy.” He added, “I’m not a psychiatrist, but I would think that the process of suspending disbelief when watching an actor would be more difficult for an audience if they knew more about the person they’re watching.”

I’m …not sure that Ben Affleck, right now, is “assiduously [trying] to maintain [his] privacy”. But I’m also not entirely convinced that he and JLo sit around coming up with ways to not have privacy. Rather, as I wrote yesterday, I think it’s more that, at this point, given that it was always going to be a spectacle, whether they actively avoid it or not. So to go back to what I wrote yesterday, to me this is more about not giving a f-ck. People were going to be up in their business anyway, instead of hating it, or complaining about it, maybe they’re just rolling with it. Or, rather, he’s learning to roll with it – because as we know, JLo always rolls…and she rolls smoothly.

So no regrets here. NO regrets!