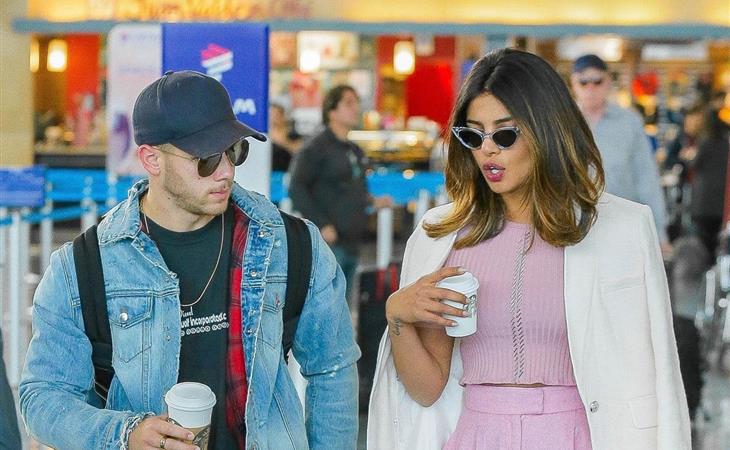 Last week Kathleen posted about Priyanka Chopra and Nick Jonas, wondering whether or not it was “good time” or a “long time”. On Friday they were seen flying in to New York together. And then on Saturday we found out why – he brought her to his cousin Rachel Tamburelli’s wedding in Atlantic City. The Daily Mail has photos of the two leaving their hotel and heading to the ceremony arm in arm.

I don’t know how it works in the Jonas family but where I’m from, you don’t bring a random to a wedding. A wedding is family member bombardment – in addition to your parents, every minute there’s a different aunt or an uncle coming at you. This is a lot to put someone through, especially if you’re not serious about them. And it’s a lot to take on, especially if you’re not serious. But again, maybe this is what it’s like with the Jonai. Maybe you can bring anyone you want to to a wedding, anyone you want to just hang out with for a night. The way they look in these photos though, like they’re totally aware that they’re being shot, and haven’t done anything to downplay the speculation over the last couple of weeks that they’re dating, tells me that they’re doing this. That it’s more than just a “good time”. Another example too of how celebrity love is on acceleration. Within two weeks it’s family weddings and holidays. At post time, Priyanka and Nick are still in New York together, they were just seen this morning. Wonder if they’ll next end up in Europe or on a beach somewhere.