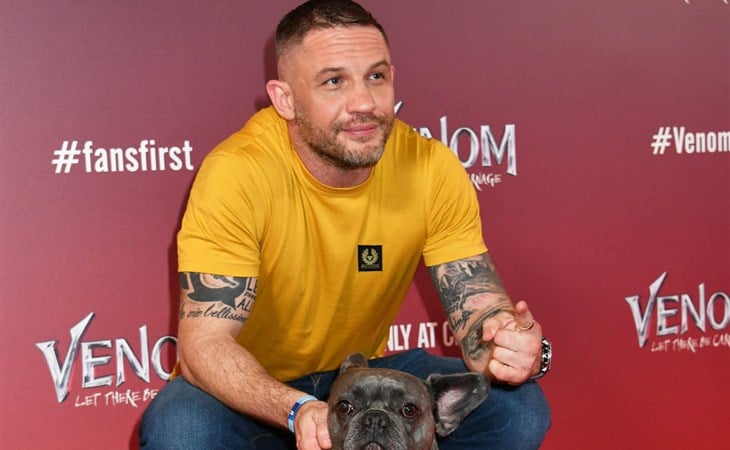 Well this feels like a throwback – this used to be a site favourite: photos of Tom Hardy with dogs. I couldn’t get enough of it and readers couldn’t get enough of it. And now it’s 2021 and Tom Hardy is starting to promote Venom: Let There Be Carnage, which sounds like a WWE event and not a comic book movie but, whatever, here we are, the movie’s coming out in less than a month and Tom and director Andy Serkis attended a fan screening last night in London and Tom’s plus one was his dog, Blue.

Blue is a French bulldog. And he is, obviously, a very good boy, sitting patiently while Tom poses for photos at the photo wall, seemingly unperturbed by the flash of the camera and the clicking sounds and the people shouting at Tom to turn this way and that. Look at him, just chilling, seemingly unbothered by this unusual addition to his routine, which most certainly never includes having to sit on a red carpet.

That said, Blue is probably used to be pulling focus. In my experience, most French bulldogs are because they’re so f-cking cute and have the most adorably hilarious expressions. Look at his face. That’s a face that is guaranteed to bring out a smile in whoever’s looking at it. Blue, then, is likely accustomed to being the centre of attention wherever he goes. This post is a good example. I haven’t said sh-t about Tom, but I’ve just written 200 words about Blue, and I could keep going, but you don’t need to read, you just need the pictures.

So about Tom and Venom: Let There Be Carnage – big reaction out of that screening yesterday. Woody Harrelson and Naomie Harris are the villains this time and if the buzz coming from the first showings is any indication, the movie is going to be huge. And there’s something that happens in the end credits that’s getting all the nerds fired up.

I never saw the first Venom. Not because I’m not interested, I totally am, especially if they’re setting up a slow burn conflict between Venom and Spider-Man, I should start doing that homework. It’s just… I don’t like gross, scary sh-t. And Venom looked terrifying. Like just the character, all that black slick ooze and those teeth and the eyes, it’s a lot to handle for a chicken sh-t.

At the same time, I live for end credit drama and frenzy. So they got me. I think I’m going to have to watch Venom this weekend at home, from the safety of my home, to get ready for the sequel. I will be joined by my own dogs who will not be as accommodating as Blue. Because my dogs don’t hang out patiently, especially when I’m trying to watch something. We can’t get through a half hour show without at least two stops because those assholes interrupt with a treat appeal. See? Blue just took back the spotlight. We’re talking about Blue again, as we should be!