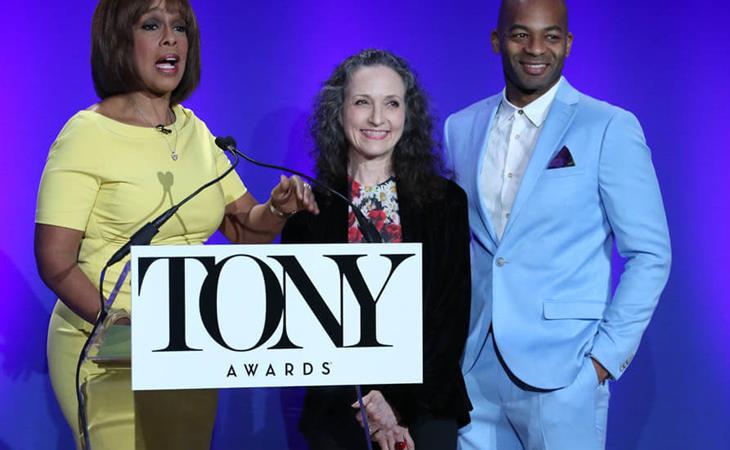 This was the first thing I saw about the Tony Awards, which made me laugh – apparently old habits die hard for Brandon Victor Dixon...

And apparently for Gayle King, too, who can’t stay away from probing questions – the identical second that BVD had finished announcing the nominees, Gayle turned to him and Bebe Neuwirth and, in front of a live audience streaming on national television, asked, “Are you surprised that neither Network nor To Kill A Mockingbird was nominated for best play? The actors were nominated, Jeff Daniels and Bryan Cranston, but… did it surprise you?”

Here’s how comfortable they looked being asked this question on a live video stream: …and then she wouldn’t take Neuwirth’s “I wish everything could be nominated” for an answer! Never change, Gayle, you go for that jugular before 9 AM!

If that didn’t amuse you enough, the new To Kill A Mockingbird, for which Jeff Daniels was nominated, was written by Aaron Sorkin, so I assume having his non-nomination publicly highlighted this way means his next TV project will involve a vendetta against a hard-hitting newswoman named Merle Queen. I’m killing myself laughing right now.

If you’re a casual Broadway observer, then the ‘old habits’ angle might be the way to look at this year’s nominees – there are a number of entry points for the uninitiated. The nominees for Best Musical include Beetlejuice, Tootsie, Ain’t Too Proud – The Life and Times of The Temptations, The Prom (which, okay, isn’t an 80s movie you had on VHS but in terms of shared experiences, might as well have been), and Hadestown, the morning’s biggest winner with 14 nominations. I’m not gonna say there’s a nostalgia factor, but it’s a retelling of the story of Orpheus and Eurydice, so… English class flashbacks, perhaps? Plus the best musical revivals include Kiss Me Kate and Oklahoma! – I know there are some high school thespians unconsciously reciting their lyrics this morning.

Anyway, the Best Actor in a Play category that Gayle mentioned includes Jeff “Will McAvoy” Daniels for Aaron Sorkin’s To Kill A Mockingbird, Bryan Cranston for Network, Paddy Considine, Jeremy Pope, and Adam Driver for Burn This. Lainey was incensed this morning that Keri Russell wasn’t also nominated for Burn This, but she also hasn’t yet given in to my requests for an all-Broadway episode of Show Your Work, so I haven’t seen it yet.

Which means I turned to my theatre whisperer, H. Vance Hues, to ask whether she was robbed, and he pointed out that he loves Keri, but “she was a’ight”… and felt that (albeit in a preview performance) she had more chemistry with Brandon Uranowitz than with Driver.

Which then raised the question of whether Adam Driver was nominated simply for being Adam Driver, and it turns out the answer is… maybe. The TONYs have always seemed to me to be less obsessed with “Hollywood” stars because they have a star system of their own, but they’re not immune to high-wattage star power. Now the question is whether Driver will do a Carpool Karaoke with TONY host James Corden in advance of the day.

In defense of Keri Russell’s exclusion (which is never defensible, yes I’m a stan, so what), the Best Actress in a play category is also stacked, including Annette Bening, Janet McTeer, Elaine May, Laura Donnelly, and Heidi Schreck for What the Constitution Means To Me, which I did not expect to care about until it was introduced to me in a This American Life segment. I fell in love unexpectedly and it’s now high on my list to see.

As for the absence of Kerry Washington in American Son (which counts Shonda Rhimes, Jada Pinkett Smith, Dwyane Wade, and Washington herself as producers) well, um, while reviews are generally kind about her performance, to borrow famous words from Katherine Heigl, it would appear that she was, you know… not given the material to warrant a nomination.

This should be a good year, and I am also rabidly excited to see Choir Boy, written by Tarell Alvin McCraney who penned Moonlight, even if I don’t understand exactly how a show that is overtly about literal choir boys is not a musical?

I’m still laughing about Gayle. But also rabidly excited about the show and debating exactly how many shows I can fit in to a whirlwind trip to New York I’ve just decided I desperately need… you? 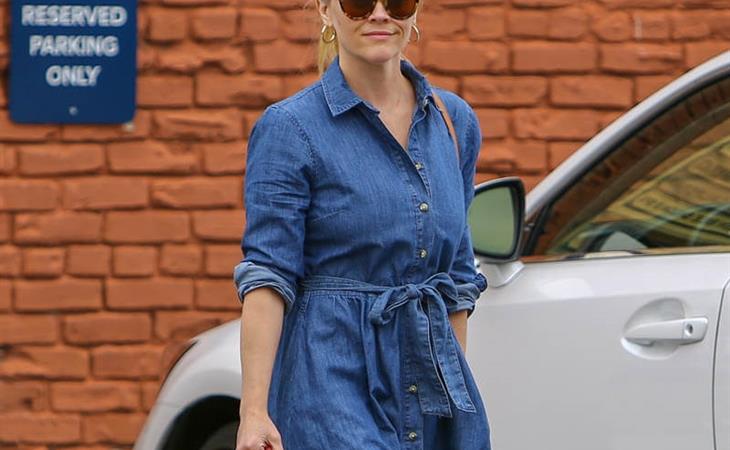