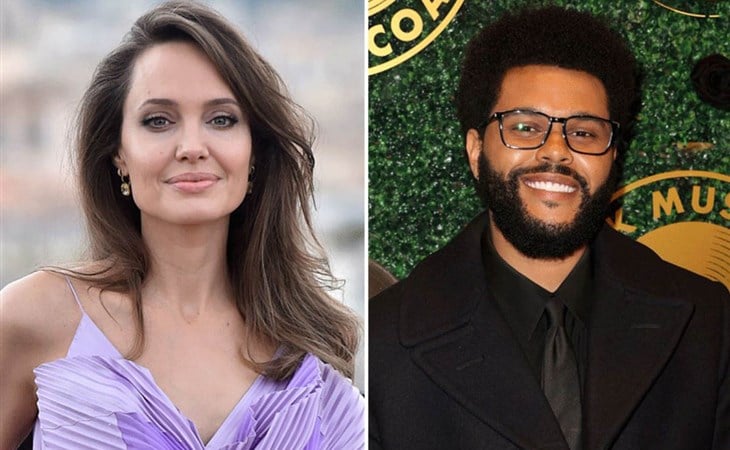 Angelina Jolie and The Weeknd were first seen together this past summer, photographed leaving Giorgio Baldi after dinner, but separately. As I wrote at the time, the food at Giorgio Baldi is good, but you don’t go there if you’re trying to keep it low-key. This a paparazzi hotspot.

After that initial dinner, Angie and Abel were linked once again when she and daughters Zahara and Shiloh were seen at Mustafa the Poet’s private show. Abel was there too. And now this past weekend the two returned for dinner at Giorgio Baldi; they arrived separately and dined in a private area before leaving together, in the same car. According to the Daily Mail, which acquired the photos exclusively, they headed back to his place. I don’t see that information from the photo agency though, so I’m not sure how legit that detail is. And it matters. It’s one thing to have dinner and leave together, it’s another to have dinner, leave together, and end up at his place. And it’s not like the Daily Mail is good for accuracy. Not sure if that’s what really happened or if it’s something they conveniently slid into the story without verification.

Without that detail though, there’s still a lot of intrigue here. There have already been reports downplaying whatever’s going on between Angelina and Abel – by the way… “Abelina”? Is that what we’re going with? Apparently they have business interests in common. Sure. Everyone in Hollywood has business with everyone else. I’m not sure all these outings and coincidences add to just business, like only business. If you’re Abel, and he’s already sung about her beauty, clearly she’s one of his beauty ideals, would you keep it only business?

Not that business can’t be a part of it. Abel’s been working all summer on his new HBO series, The Idol, that’s supposed to go into production soon. The Weeknd’s new album is also said to be complete and last month he told The Hollywood Reporter that they were figuring out when to release it. I’m wondering if he might have a song on the Eternals soundtrack – and even if he doesn’t, imagine if Angelina shows up in one of his new music videos? Or is it possible she has a role in The Idol? It’s apparently about a female pop singer getting involved with a night club owner who’s also a cult leader. There’s a lot of potential for Angelina in that kind of narrative, and she’s one of the few big name actors who’s yet to get into the television streaming space – it’s only a matter of time.