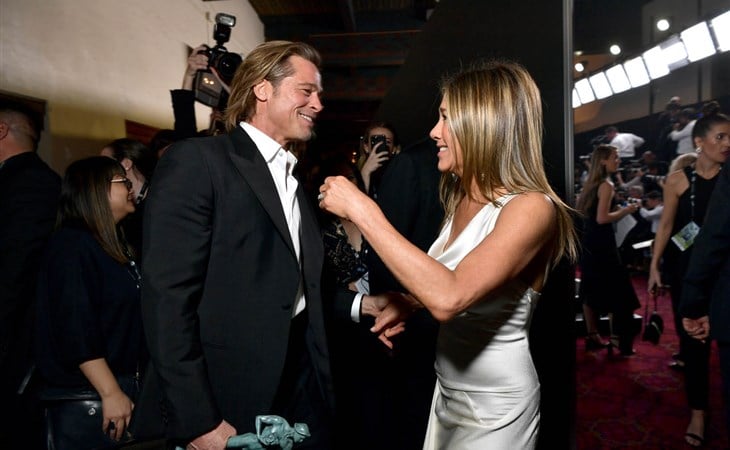 Anticipation for the Brad Pitt and Jennifer Aniston “red carpet run-in”, as we call it in the business, has been building since the Golden Globe nominations were announced back in December with both receiving nominations. It did not happen at the Globes, although Brad was asked about it and he was like, yeah, of course I’ll say hi to Jen, she’s a good friend.

Well, last night at the Screen Actors Guild awards, it finally happened. They delivered – under the most ideal conditions, with each winning in their respective categories. Does it go down this way if Jen did not take home the actor for Best Actress in a Drama Series? I know you don’t want to talk about this right now but, as students of gossip all of us, these questions matter. Timing matters. It adds to the narrative, the narrative in this case being that this is a Hollywood couple that no one wants to let go of, and they know this, of course they know it. They know the value of that photograph, this series of photographs. And they’re not giving it up on a nothingburger of an occasion. Giving it up, however, on a night when both go home with trophies, the champions of among their peers, reclaiming their status as Prom King and Queen of Hollywood, with Jen not wearing black for a change, complete with the hardware – THAT is what they’d be saving it up for, right? In the process, they’re keeping everyone in business.

the entire staff of Us Weekly just got a text that was like, “GET TO THE OFFICE NOW” pic.twitter.com/DxxMvyG04B

Absolutely it’s a business. Brad and Jen and Brad and Jen and Angelina is an entire f-cking industry. And not just for the tabloids and gossip blogs either. Even the SAG Awards themselves thirstily exploited the moment:

I mean it’s one thing for the magazines and the entertainment outlets to go there but when the guild – the actual Screen Actors Guild – knowingly winks at it on social media, can you really keep protesting about people getting too invested in your personal lives?

At the Golden Globes, Brad took the question about Jen on the red carpet, a question that would have been verboten not too long ago. Last night it was Jen’s turn. She was asked and … well… it wasn’t verboten for her either:

They were open to talking about it and they were open to being on camera, not only greeting each other but Brad let himself be filmed backstage while watching Jen accept her award:

Another look at Brad Pitt watching Jennifer Aniston winning her statue for #TheMorningShow at the #SAGAwards pic.twitter.com/Wg6vQm8Q1z

These are all the elements that contribute to a storyline. And the story that so many desperately want to believe in is that Brad and Jen, after all these years, will finally find their way back to each other and be our OTP again, despite the fact that, well, you know, would we want to go backwards if we were in this position? I guess it depends on how you sell it, right?

You can’t sell it as “Jen’s been waiting around for Brad and is willing to overlook all the history and embarrassment of the past”. But you can, I guess, sell it with the Photo Assumption from this shot: Photo Assumption is our favourite gossip game of baseless conclusions. It is by no means accurate – but when has that ever stopped us from seeing what we want to see? What we want to see here is the grip that Brad has on Jen’s wrist as she’s turned away, walking away. He’s looking wistfully at what he lost, and wants it back. He’s going to be the one to chase her down, no matter what it takes, as long as it takes. “Go get your girl, Brad!” is what Twitter has been screaming all night. But she is determined to move on. Will he wear her down? Can she resist his overtures? That’s going to be Us Weekly’s cover story this week. And it’ll go on, like episodic television, like my favourite Chinese and Korean romantic dramas, for the next few months. Until…

Ultimately that’s the question. Jen says all this speculation is “ridiculous” and still ended up fueling it just a couple of hours later. Is a proper reconciliation actually possible?

On our group chat last night, Duana confidently declared that it’s not. That’s on brand for Duana, by the way. She will be the one to go against what everyone else wants. The way she’s calling the Photo Assumption, Jen is “completely over it”. That this is actually closure – when two people who’ve been connected this way for two decades and a lifetime of drama greet each other in the hall, surrounded by onlookers, and comfortably congratulate each other with a kiss on the cheek and an embrace, and to KEEP WALKING, is the ultimate “bye, Felicia”, especially after being recognised for the best performance of her career.

Right now, they’re the people who will take advantage of what you want because it’s to their benefit. It’s been a long, long, long time since we’ve seen someone run an Oscar non-campaign campaign as effectively as Brad Pitt. They are eating up each and every one of his speeches. Did he hire a comedy writer for his SAG acceptance speech? Because that Quentin Tarantino foot fetish joke was sharp.

“Quentin has separated more women from their shoes than the TSA.”

I mean, I don’t want to be uncharitable but I refuse to believe he came up with that by himself. I’ll give the “Tinder profile” crack. But whoever came up with the TSA part is a goddamn professional.

And he continues to mock himself for his personal life.

“Let’s be honest: it was a difficult part. A guy who gets high, takes his shirt off, and doesn’t get on with his wife…it was a big stretch.”

That room ate that sh-t up. Mainlined it. They’re getting high off it. Never mind that if you dig a little deeper, the joke was about how miserable it was to be married. And although I know we all don’t want to remember it now, he’s done this before – back in 2011, in an interview with Parade, here’s what Brad said about his marriage to Jen:

“I started to get sick of myself sitting on a couch, holding a joint, hiding out. It started feeling pathetic. It became very clear to me that I was intent on trying to find a movie about an interesting life, but I wasn’t living an interesting life myself. I think that my marriage [to Jennifer Aniston] had something to do with it. Trying to pretend the marriage was something that it wasn’t.”

What’s the lesson here? A beautiful man can say anything. 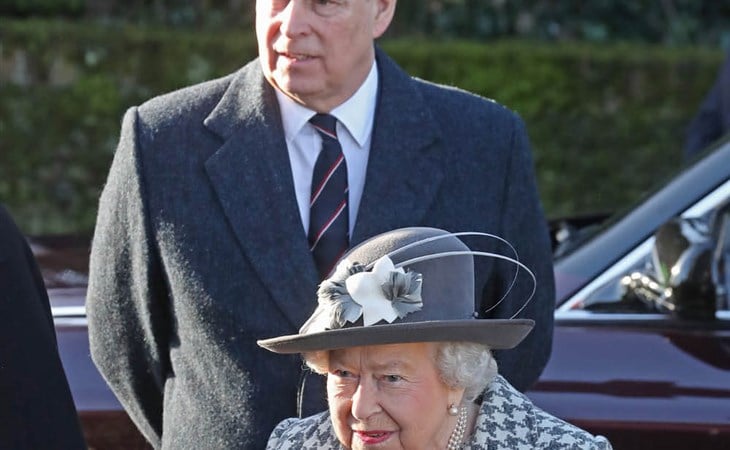 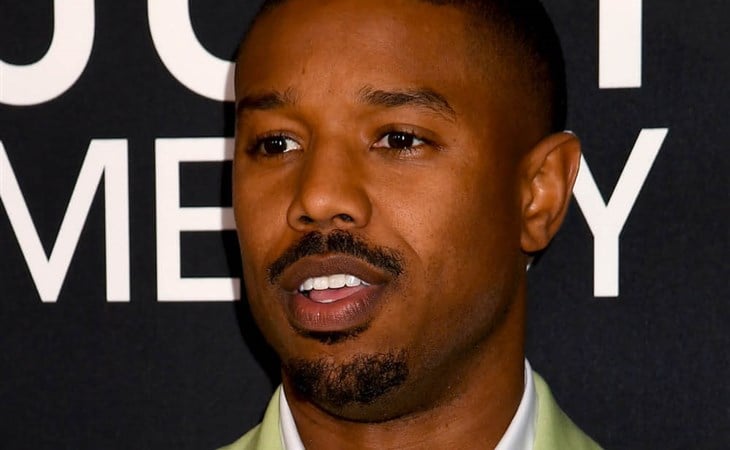