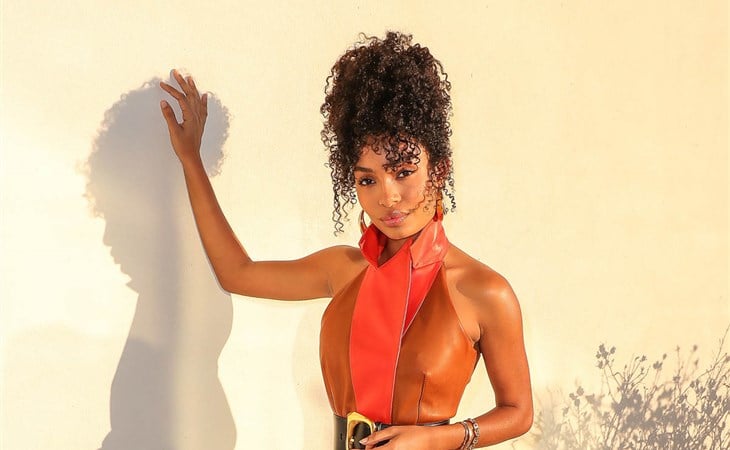 Gah! They beat me to it! When I saw these photos of Yara Shahidi in a dark orange/tan leather dress with a red collar over knee-high black leather boots, I was thinking… Outfit of the Week? But also, I knew it wouldn’t hold until Friday and the Fug Girls are featuring it here – because a GREAT outfit does not escape notice, especially in these COVID times. (Go Fug Yourself)

Princess Eugenie and her husband, Jack Brooksbank, moved into Prince Harry and Meghan Markle’s Frogmore Cottage six weeks ago… and now they’ve moved out. Nobody knows why. But let’s get ahead of the story for The Sun or the Daily Mail and make up a reason and say that Harry and Meghan kicked them out. Or had installed spy-cams all around the house to eavesdrop on them. (Dlisted)

Meanwhile, Princess Eugenie’s dad, Prince Andrew, is making headlines today, even though he’s been trying to stay under the radar, because it’s been revealed that he lied about not staying at his friend, the dead rapist pedophile, Jeffrey Epstein’s in New York. Now Buckingham Palace is refusing to comment on the matter. Of course they are. They’re hoping with the holidays and with COVID that the public won’t concern itself with these matters. Remember all those reports that Andrew was planning on a comeback in 2021? How are those plans coming along? (Pajiba)

That op-ed in the Wall Street Journal about Dr Jill Biden… did you read? I regret reading it. Because the author is a misogynist and already there have been stories circulating since the article went viral about what a sexist prick he was when he was teaching. DOCTOR Biden earned her doctorate. DOCTOR Biden is still teaching, she’s still a champion of education, and she is an asset to the White House and the administration. Which is precisely why people are so scared – because she’s a woman, a competed, informed, well-trained, strategic, and thoughtful woman who will now be living in the power centre of the United States. And for some reason, that still f-cking scares people. (Cele|bitchy)

Many of you have already watched The Queen’s Gambit. Others are just getting into it now. Some are waiting until the holiday break – and if that’s you, you’ll soon join the rest of us in our obsession with Beth Harmon. Beth is a fictional character, but there are real life female chess geniuses. One of them lives in Toronto. Her name is Yuanling Yuan and if I ever meet her, I’m going to fangirl all over the place.  (Toronto Star)