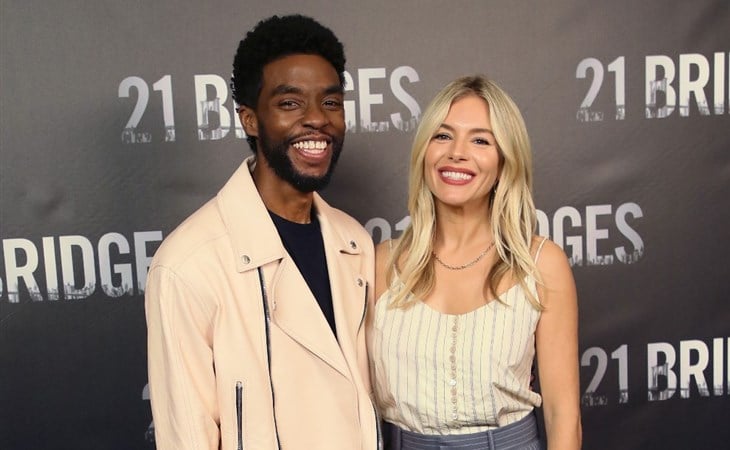 Empire Magazine’s new issue is dedicated to Chadwick Boseman featuring interviews with his collaborators, colleagues, and co-stars. One of those people is Sienna Miller. They worked on 21 Bridges together and Sienna shares the story of how she came to sign onto the film and what Chadwick did to support her.

Sienna explains that Chadwick, who was a producer on 21 Bridges, asked her to be in it and told her that he admired her work – which meant a lot to her because…obviously. At the time though, Sienna didn’t really want to be back on set. She was tired, she’d been working back to back and her daughter was quite young. Here’s how it all came together:

“I didn't know whether or not to tell this story, and I haven't yet. But I am going to tell it, because I think it's a testament to who he was,” Miller says. “This was a pretty big budget film, and I know that everybody understands about the pay disparity in Hollywood, but I asked for a number that the studio wouldn't get to. And because I was hesitant to go back to work and my daughter was starting school and it was an inconvenient time, I said, ‘I’ll do it if I'm compensated in the right way.’ And Chadwick ended up donating some of his salary to get me to the number that I had asked for. He said that that was what I deserved to be paid.”

DONATING SOME OF HIS SALARY!?!?!

First of all, obviously, this speaks to Chadwick Boseman’s integrity, his values, his allyship. And reminds us, not that anyone should need to be reminded, of what a tremendous loss it is that he’s gone. Yesterday marked one month since his passing and it still doesn’t seem real – and now, with Sienna’s story, it seems as though we haven’t yet fully appreciated the scope of his loss, because there are likely more accounts like this that will emerge of how he tried to make change, how he pushed for fairness, and how profoundly massive his absence is and will be.

He DONATED HIS SALARY which….he shouldn’t have had to!

The fact that Sienna used the word “donate” to describe Chadwick’s gesture, this act of solidarity, that in itself is f-cked up because making sure your colleague is paid fairly should not be a charitable contribution. Philanthropy should not be a catalyst for pay equality!

So it’s a bad, bad, BAD look on the studio. Chadwick made his “donation” because the studio wouldn’t pay Sienna’s full fee. That their star and producer, a Black actor in an industry that historically hasn’t exactly helped Black performers, had to dip into his own fee to secure the right actor for the project is… like… how are they not embarrassed?!

What’s especially heartbreaking about this situation is that Chadwick gets it (he understood that she was asking to be compensated and why: because if she’s going to take time away from her child, it better be WORTH IT) but clearly so many other people don’t. We may be moving towards a more modern division of domestic labour but we’re still living in a time when women – in Hollywood and beyond – are the ones taking on the majority of the work at home, with parenting and other responsibilities. That’s especially true now, during this pandemic, as women are being pushed out of the workforce because they must sacrifice their careers for their families. The pay gap means that when parents have to decide who stays home, it’s often the men who keep their jobs because they’re compensated more. But without women in the workplace, being compensated fairly, how diverse is the environment, and without a diverse environment, how effective is the work that’s being done? How representative is that workplace of the clients they’re serving, of the products they’re producing? This bullsh-t will continue unless attitudes change and unless workplaces commit to building work cultures that are welcoming to all employees. This is diversity and inclusion too.

Chadwick Boseman tried to pull up for Sienna Miller. It’s clear, even though she doesn’t spell it out, that the studio wasn’t coming through, and so in order to make his movie happen, and in order to do it in a way that the best actor for the role could be a part of it, he made a “donation”. I wonder what the studio executives who shut Sienna and Chadwick down are thinking today as they reflect back on those conversations, and what will happen the next time they have a similar conversation.

Sienna’s certainly been having private conversations about it. As she tells Empire:

“It was about the most astounding thing that I've experienced,” she says. “That kind of thing just doesn't happen. He said, ‘You're getting paid what you deserve, and what you're worth.’ It's just unfathomable to imagine another man in that town behaving that graciously or respectfully. In the aftermath of this I've told other male actor friends of mine that story and they all go very very quiet and go home and probably have to sit and think about things for a while. But there was no showiness, it was, ‘Of course I'll get you to that number, because that's what you should be paid.’”

And here’s what we shouldn’t miss about her rounding out the story the way she did – she’s not here necessarily to shame the Mark Wahlbergs of the world for not donating their salaries. This should NOT be the way forward. The way forward, however, should be more male actors like Chadwick standing alongside their female counterparts and advocating for pay equality. Not just out of grace or respect or kindness but because of the power in numbers.

You know why the Friends cast famously got paid the same – and a LOT? Because they did it together. Because then the power shifts. Then the studios, the bosses, can’t isolate everyone into their respective lonely corners and take the pot in the middle. It’s the only way to take on the status quo. Even Chadwick Boseman, for all his success, particularly after Black Panther, didn’t have enough power to get the studio to a place where they could meet Sienna’s fee. Ultimately it takes community. More people who are willing to stand up like Chadwick in those rooms.

In the meantime, you know what I hope we see? Let’s not ask Sienna about this anymore – she’s said what she has to say. Ask her future male costars. Ask the male lead in her next project. Ask him what he’s doing to eradicate the pay gap. Ask him what he thinks of what Chadwick did.

For more on Chadwick Boseman in Empire, click here. 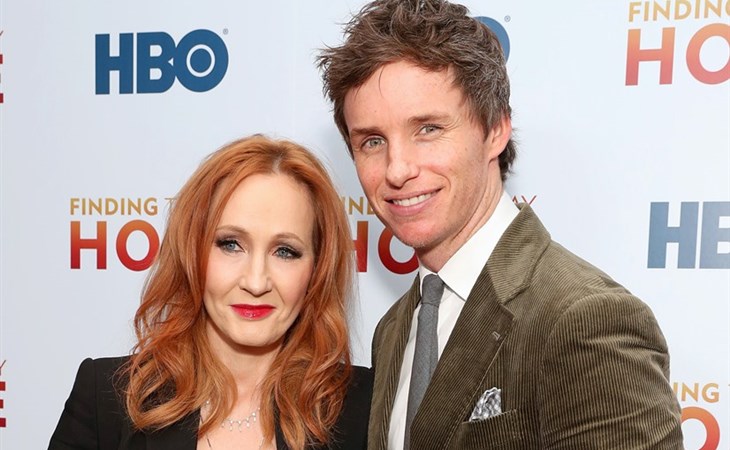 Eddie Redmayne sticks his foot in