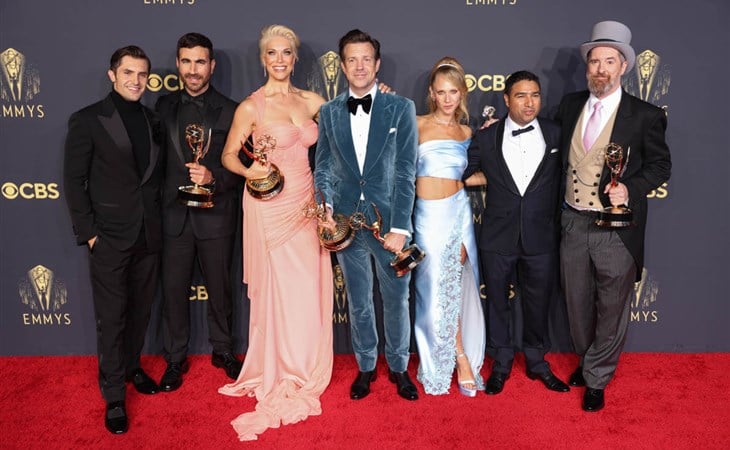 Ted Lasso did not sweep the Emmys as Hacks snagged a few comedy awards of its own, but the feel-good show of 2020 still came out on top with acting wins for Hannah Waddingham, Brett Goldstein, Jason Sudeikis, and it took the top prize, Outstanding Comedy Series.

These wins come in the midst of season two, which has provoked a decidedly divisive response online. One could even say that there is a Ted Lasso backlash. But where is it coming from? I think it’s in part down to streaming and bingeing. Ted Lasso was not a hit right off the bat last year, it gained momentum and coalesced after season one was available in its entirety on Apple TV+. This means most people came late enough to the show to binge the entire season at once. Season two, however, is weekly, and we’re getting the same week-to-week complaints we see with shows that insist on a weekly schedule in the binge era. There is no doubt that weekly episodes are better for the shows, just as there is no doubt that the majority of people prefer to binge. I think a lot of the Lasso complaining is just down to this impatience and audiences fighting/resenting the schedule.

But this season is also darker. The first season is a weighted blanket that many people, myself included, sold as the spiritual successor to Schitt’s Creek, another warm hug of a show. And season one is very much that, if all you ever saw of Ted Lasso was the first season, it would leave you feeling good (if wondering about the fate of AFC Richmond). The second season, though, is drilling into Ted’s positivity and mental health issues, and this week brought a side adventure episode focused on how Coach Beard (Brendan Hunt) deals with his own emotional issues, which is chiefly through avoidance and toxic relationships. Where Schitt’s Creek deliberately chose to be a world of welcome and warmth, Ted Lasso is going the other way, challenging Ted’s worldview and the limits of positivity as a coping mechanism. It no longer feels as welcome and warm as it did before, and some people are simply not into that. But just because a thing is not what you think it should be, does not make that thing bad. Ted Lasso is setting up significant challenges for its characters, this season IS going somewhere. It just might not be as friendly a place as season one.

Anyway, the Lasso crew was out in force at the Emmys. Juno Temple, nominated alongside co-star Hannah Waddingham form Outstanding Supporting Actress in a Comedy Series, looked sincerely thrilled to lose to her friend. Waddingham didn’t seem to care everyone kept mispronouncing her name. Jason Sudeikis looked excited and proud of everyone who won and gave a nice speech about teachers and mentors when it was his turn to collect a trophy. And then the whole group did the Roy Kent chant backstage, much to Duana’s horror. Now you know how I feel about musicals!

The whole Ted Lasso cast & crew did the Roy Kent cheer backstage and it was pretty special #Emmys pic.twitter.com/2HNJsTuc5d

His newfound appeal is down to his shift in vibe. Previously, his public persona was “smug asshole”, thanks largely to all the smug assholes he played in films and television. Now, though, he has the conferred Power of Ted, which might be a real part of him, and there was the whole Zoom hoodie thing, which people loved. People are just very willing to be pleased by Jason Sudeikis these days, so if he shows up somewhere looking even halfway respectable, online horniness will ensue. Also, when ID’ing his teal velvet tux, he referred to Tom Ford as “little Tommy Ford”, and I would really like to see Tom Ford’s face when he hears that.

“Who wore it better?” 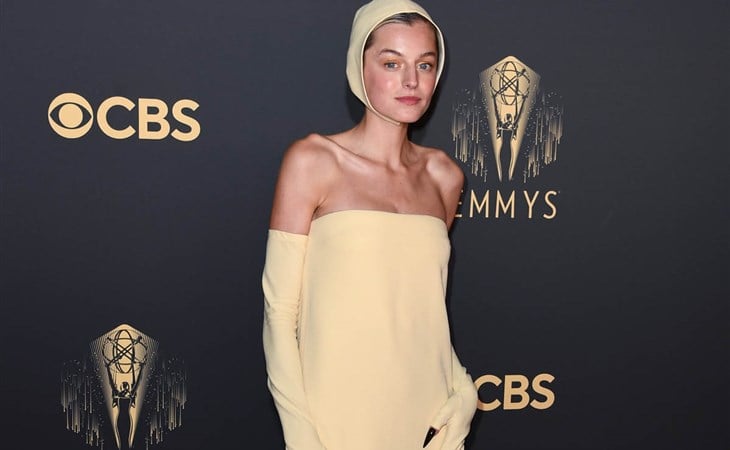